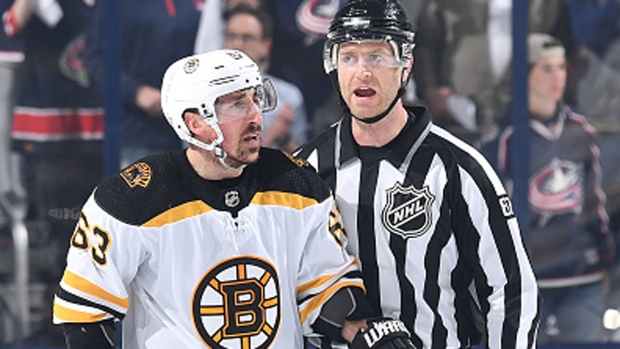 Brad Marchand is in the spotlight once again after punching an unsuspecting Scott Harrington in the back of the head on Tuesday night.

The incident occurred late in the third period of the Columbus Blue Jackets 2-1 victory over the Boston Bruins in Game 3 after Sergei Bobrovsky froze the puck in the Columbus end. As officials broke up an ensuing scrum, Marchand appeared to punch Harrington while the Blue Jackets defenceman was on his knees.

Harrington, who was not injured by Marchand, called the jab a "hockey play" on Wednesday, but added he would've liked to see a penalty called.

“I know there wasn’t a suspension or anything," Harrington said, per NBC Boston. "It is what it is and we’re moving on”

"I am not giving you my thoughts. I don't need to give any thoughts on that," Tortorella said. "You guys can come up with something there."

Marchand has been held without a point through three games against the Blue Jackets, but made headlines in Game 1 when he stepped on Cam Atkinson's stick, breaking it prior to a faceoff. He also took a shot at ex-teammate Riley Nash after Game 1.

The 30-year-old was incident-free with player safety this season and posted 36 goals and a career-high 100 points in 79 games. He has four goals and nine points in 10 playoff games.

Marchand, however, has a long history of facing discipline and has forfeited $879,522 in salary since 2011 in fines and suspensions. His last suspension came on Jan. 23 of last year, when he received a five-game ban for elbowing Marcus Johansson in the head.

Because the incident occurred within the past 18 months, Marchand is considered a repeat offender.