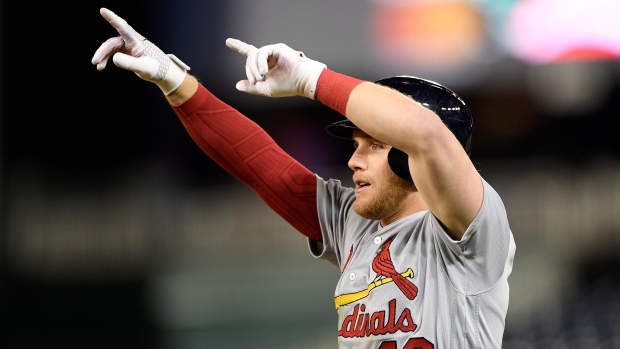 ST. LOUIS — Harrison Bader is confident he'll be in centre field for the St. Louis Cardinals when the season begins.

Bader was in St. Louis on Saturday taking part in the annual Cardinals Winter Warm-Up.

"I'm the starting centre fielder," the 25-year-old Bader said. "It's my position. I'm going to take it. There's no sense in talking about it. I'm looking forward to showing up Day One guns blazing and ready to go."

While there is no question about his defensive ability and speed in centre, it's his bat that gives some pause.

"Last year, individually it wasn't what I wanted it to be production-wise," Bader said. "The biggest thing I've taken away at this point is how I responded. I've been very fortunate to be with people behind the scenes who've helped me take steps in the right direction to help me produce like I want to and how I know I can.

"There's no secret to it. There's no special sauce. This is a day-in and day-out grind. My swing is feeling really good. All you can do is go out there and play hard. That's what I've been doing."

Bader finished his 2018 rookie season hitting .264 with 12 homers and 15 stolen bases in 138 games. He took over in centre after Tommy Pham was traded on July 31 to Tampa Bay. His flair in the outfield, making diving catches or running down line drives in the gap, made him a fan favourite.

Bader began 2019 as St. Louis' starting centre fielder, but offensive struggles landed him on the bench. He was sent to Triple-A Memphis on July 30. When he was demoted, Bader was hitting just .195 with six home runs in 90 games.

The Cardinals brought him back Aug. 20 and Bader made a big impression in his first game after being called up. He legged out a triple, scored two runs, walked three times and made a spectacular diving catch in shallow centre during a 9–4 win over the Milwaukee Brewers.

Then in a five-game stretch against Colorado and Pittsburgh, Bader got eight hits. But he tailed off again after that.

"My bat was not present last year. Plain and simple," Bader said. "It showed up a couple of times but I wasn't nearly as consistent as I needed to be."

Following the season, he was a Gold Glove finalist.

"The Gold Glove recognition was nice," Bader said. "As tough as it was at the plate, you don't want that to carry over into the field. Regardless if I'm a .330 hitter or what I was last year as a hitter, I always want to play as a Gold Glove centre fielder.

"That mentality will always stick with me."

Bader certainly might be the opening day starter in centre. However, he could just as easily find himself in a platoon role.

There might be a challenge to Bader in spring training. Center field will likely be one of the most competitive battles for the Cardinals this spring.

President of baseball operations John Mozeliak has said he views centre field and left field as open tryouts this spring.

Possibly in line for the job in centre is Dylan Carlson, a 2016 first-round draft pick. Carlson is considered one of the team's top breakout prospects this season. Last year, he hit .292 with 26 homers and 20 steals as a 21-year-old between Double-A Springfield and Triple-A Memphis.

Carlson has above-average speed and shows the instincts that could make him a standout defender in centre.

The Cardinals are thought to be interested in dealing for Rockies star third baseman Nolan Arenado. Bader has been one of the names mentioned in trade speculation.

"I live in the present. I know my name has been tossed around," he said. "No trade has been made so I'm going to go with, they still have confidence in me to go on the field and do what I'm supposed to do and capable of doing."

When the Cardinals recently made a deal with Tampa Bay for pitching prospect Matthew Liberatore, some initial rumblings had Bader included in the trade. He was on a plane and when he got off, Bader said he had about 60 messages on his phone telling him he had been traded.

One of those messages, however, was from his agent, telling him he was not part of the deal.

"I'm thankful for every day I get to wear this uniform. I want to be a Cardinal. I have been a Cardinal since Day One. I want myself to be a consistent bat. I want to be a very hard out night in and night out. I don't want any pitching staff or pitcher to think I'm an easy out," Bader said.

That's what he wants to show the Cardinals in spring training.

"There's no other focus in my life than to do what I need to do to produce on the field and to help us win a World Series," Bader said.