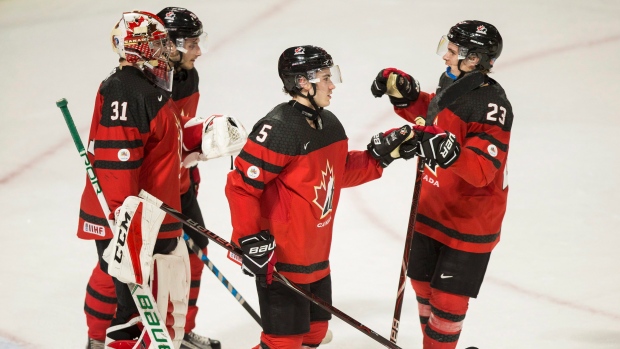 Raddysh had a pair of goals and Thomas scored and added two assists as Canada routed the Czech Republic 9-0 on Wednesday in the first of two pre-tournament exhibition games ahead of the world junior hockey championship.

"It's nice to have Raddysh on our side," said Thomas, who as a forward with the OHL's London Knights normally checks against Raddysh and his Erie Otters teammates. "We battled a lot in the playoffs last year so being able to play with him is definitely nice."

Thomas and Raddysh also assisted on Boris Katchouk's goal, as Canada dominated possession throughout the game and set up intricate passing plays to pick apart the Czech defence.

"Thomas is a fast guy and can make a lot of skilled plays and also Katchouk on the left wing there, he's a hard-working guy who can do the same," said Raddysh. "We've clicked in the last couple of practices and tonight was a success for us. We just have to continue to build off of that."

Carter Hart had a 23-save shutout and will likely be the starter when Canada begins the world championships against Finland on Dec. 26 in Buffalo, N.Y. Before the game head coach Dominique Ducharme indicated that Colton Point may start in net on Friday against Switzerland in Hamilton in another pre-tournament game.

Maxime Comtois had the eventual winner, while Jake Bean, Jonah Gadjovich, Drake Batherson and Cal Foote also scored in front of a sold-out crowd of 9,036 at Budweiser Garden.

Jakub Skarek stopped 25-of-34 shots in net for the Czech Republic. Josef Korenar turned aside two shots in relief.

Comtois finished off a tic-tac-toe play with Alex Formenton and Cale Klague by batting the puck past Skarek to open scoring. Thomas and Raddysh made it 2-0 with a perfectly executed 2-on-1 six minutes later. Thomas carried the puck over the blue line, passed to Raddysh, who deked out Skarek before passing the puck back, giving Thomas a wide-open net.

Bean scored five minutes into the second to increase Canada's lead to 3-0. A slapshot from Katchouk with 2:50 left in the second made it 4-0.

The Czech Republic came closest to solving Hart 5:32 into the third period when the puck was sliding along the goal-line behind him but the knob of his stick — and the blades from his defencemen — kept it out.

Thomas and Raddysh connected on Canada's fifth goal near the midway point of the third period. Thomas gave Raddysh a cross-crease feed that was easily redirected into the net. Raddysh scored his second of the night just 27 seconds later, this time on the power play, to make it 6-0.

"I think we moved the puck really well," said Thomas. "Having two great players to play with makes it easy on you. Radds and Katchouk they can really bury a puck so just try to get it to them and let them do their magic."

Less than two minutes later, Batherson flipped his rebound over to Gajovich, who backhanded it into the net to add to Canada's already sizable lead. Batherson then scored his own goal, wiring a wristshot from the top of the circle past a screened Skarek.

Skarek was chased from net by Canada's ninth goal of the night at the 14:22 mark of the third period. Another pass across the crease landed on the stick of Foote, who had an empty net as Skarek was in the splits and unable to slide over for a stop.

Notes: Defenceman Dante Fabbro (lower body) and forward Dillon Dube (shoulder) are listed as day to day. Dube skated Wednesday morning but Fabbro has not been on the ice since an exhibition against Denmark on Dec. 15.