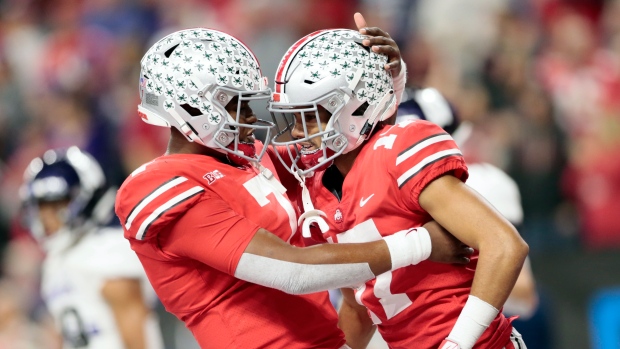 INDIANAPOLIS -- Dwayne Haskins added five more touchdown passes to his single-season record Saturday and No. 6 Ohio State relied on its staunch defense to hold off a second-half charge from No. 21 Northwestern for a 45-24 victory to claim its second straight Big Ten championship.

The Buckeyes (12-1, 9-1 Big Ten, No. 6 CFP) won their third title in five years and their fifth consecutive game -- but it's unlikely to get the Buckeyes into the four-team College Football Playoff.

Haskins finished 34 of 41 with 499 yards and one interception. It's the fifth time he topped 400 yards this season.

Clayton Thorson went 27 of 44 with 267 yards, one TD and two interceptions as he helped Northwestern trim a 24-7 halftime deficit to 24-21 midway through the third quarter. The Wildcats (8-5, 8-2) couldn't get any closer, though, as they lost only their second conference contest in their last 17 league games.

It still turned out to be a more intriguing game than many expected, especially after the Buckeyes' fast start.

Haskins eluded a couple of defenders on third-and-11, buying just enough time to find Terry McLaurin for a 16-yard TD pass on the game's opening possession.

Then the Buckeyes answered with what appeared to be knockout flurry. Dobbins scored on a 2-yard run, Blake Haubeil made a 42-yard field goal and McLaurin caught a 42-yard TD pass from Haskins to make it 24-7 at the half.

The Wildcats opened the second half with Thorson's 18-yard scoring run and made it 24-21 when he found Cameron Green on a 2-yard TD pass with 8:03 left in the third quarter.

After Haskins connected with Chris Olave for a 29-yard TD pass, Charlie Kuhbander made a 21-yard field goal to get the Wildcats within 31-24 with 10:34 to go.

But Haskins sealed it with two more TD passes -- a 9-yarder to Johnnie Dixonand a 17-yarder to Olave.

Northwestern: The ascending Wildcats showed some grit after an abysmal start, which could have buried them. Instead, they fought their way back into contention and gave themselves a shot. Now they'll wait to find out when and where they'll get another chance to shine under the bright lights.

Ohio State: The Buckeyes' performance was reflective of this season. They played like one of the nation's top teams in a dominant first half and when they were in closeout mode late. In between, they put on a mystifying performance. Eventually, Haskins closed out the win that will likely send them to the Rose Bowl.

Ohio State: The Buckeyes forced (three) turnovers. ... Dixon had seven catches for 129 yards, Parris Campbell had seven catches for 89 yards, Olave finished with five for 79 and McLaurin had three receptions for 78 yards. ... Dobbins ran 17 times for 68 yards and became the first player in school history to record 1,000-yard rushing seasons as both a freshman and sophomore. He also caught four passes for 50 yards and one TD.

Northwestern: The Big Ten runner-ups will wait to find out who and where they play.

Ohio State: The Buckeyes are hoping the selection committee gives them a shot in the playoff, knowing their more likely destination may be the Rose Bowl.