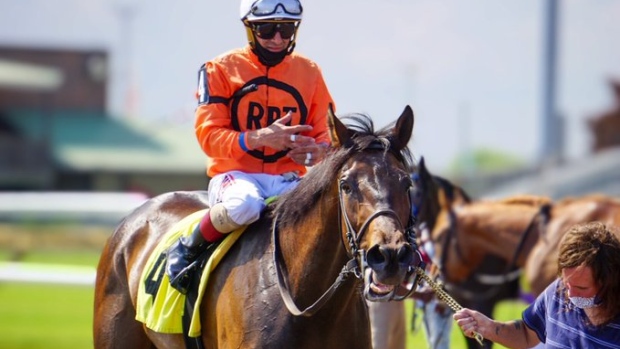 Have a Souper Day , Twitter/@WoodbineTB

TORONTO — Thoroughbred trainer Robert Tiller has won the 2,000th race of his career.

Tiller did it at Woodbine Racetrack — his longtime home base — in the seventh race of Friday's program.

With hockey Rafael Hernandez aboard, the Tiller-owned Have a Souper Day won a six-horse race as the favourite. The three-year-old paid $2.90 for the win.

Woodbine made a special winner's circle presentation to Tiller after the victory.

A longtime resident of Brampton, Ont., the Amsterdam-born Tiller was inducted into the Canadian Horse Racing Hall of Fame in 2008.

The 70-year-old Tiller won his first race in 1972 and has career purse earnings of more than $66.6 million.

"It's a great honour," said Tiller. "It's been a lot of years. The biggest thing I like about this is most of these starts were right here at home at Woodbine because I don't winter-race usually. I've been training (since the 1970s) and 2,000 wins is a wonderful honour. I just wanted to get it out of the way and I'm very, very honoured and pleased."

The historic win during the third week of racing on Woodbine's revised schedule, which was delayed during the early stages of the COVID-19 pandemic.