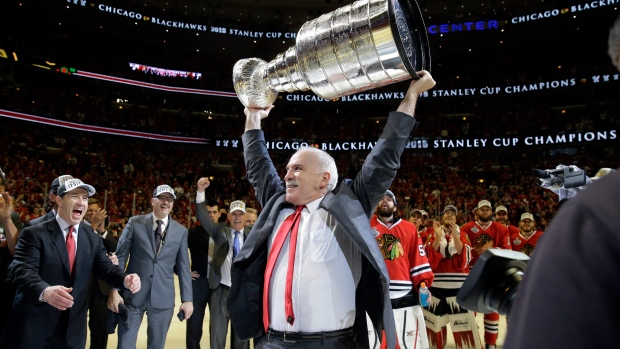 The Chicago Blackhawks announced a three-year contract extension for head coach Joel Quenneville on Tuesday, hours before his bid to match Al Arbour for second place on the NHL’s all-time coaching wins list.

Quenneville, 57, is now under contract through the 2019-20 season. He was due to enter the final year of his current deal next season.

“Right now, we’re having too much fun, so we’re not considering [retirement],” Quenneville told Chicago reporters recently. “I’ve always been around good teams and good players. It’s been fun."

Quenneville’s .651 points percentage (343-168-69) with the Blackhawks is the best in Chicago franchise history.

With 781 wins, Quenneville is already the NHL’s active wins leader among coaches, but he is also two away from becoming the all-time winningest coach not named Scotty Bowman. Quenneville can tie Arbour’s mark of 782 wins on Tuesday night when the Blackhawks host the Nashville Predators.

But he is still 463 wins and six Stanley Cups behind Bowman.