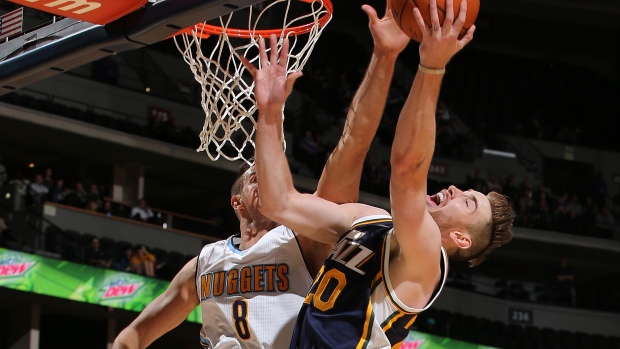 DENVER - Gordon Hayward's shots were falling with regularity, an encouraging sign his early season struggles were starting to fade.

Hayward scored 20 points, seven in the fourth quarter, and the Utah Jazz pulled away late to beat the Denver Nuggets 96-84 on Thursday night.

"It was good to kind of get out of it," said Hayward, who was 7-of-13 from the field, including two 3-pointers. "Still not there at all with where I want to be but the rhythm is starting to get there."

Hayward entered the game hitting 35.2 per cent of his shots and was coming off a 7-for-20 effort in a 108-92 loss to Portland on Wednesday. But he found the range against a familiar foe, scoring 20 or more points against the Nuggets for the seventh time in his career.

"He's the leader of the team, so to see him out there getting it going, he gets everybody else going," Trevor Booker, who chipped in 13 points, said.

Rudy Gobert added eight points and 16 rebounds for Utah, which kept the Nuggets winless in their two home games this season. Alec Burks and Trey Burke had 12 points apiece.

Danilo Gallinari had 18 points to lead Denver while Will Barton added 12. Denver, outshot by Utah 43.5 per cent to 38.9 per cent, started strong but wilted in the second half.

Trailing by two points at halftime, Utah took a 65-64 lead into the fourth quarter and stretched it to 78-71 on Burke's layup with 6:49 remaining.

Denver got a jumper from Jameer Nelson but Rodney Hood and Hayward hit successive 3-pointers as part of a 12-0 run carrying the Jazz to a 90-73 lead with 4:17 left. The Jazz maintained a double-digit lead the rest of the way.

Burks hit a 3-pointer to start an 11-2 run over the last 5 1-2 minutes of the second quarter, pulling the Jazz within 42-40 after trailing by as many as 13 points earlier in the game.

Jazz: Derrick Favours fought through flu-like symptoms to play but he was limited to just over 15 minutes and did not play in the second half. ... Utah's bench outscored Denver's 52-34. ... F Trey Lyles turned 20 on Thursday.

Nuggets: C Joffrey Lauvergne missed a second consecutive game because of a lower back strain. ... Denver has shot less than 40 per cent from the field in each of its three losses. ... F Kostas Papanikolaou was signed to the roster earlier Thursday and G Erick Green was waived.