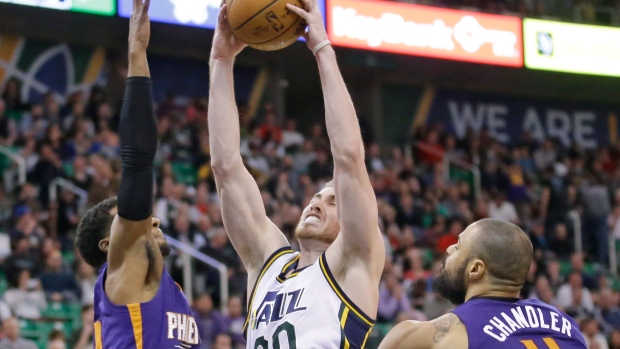 SALT LAKE CITY - Little has come easy for the young Utah Jazz this season, a team that has to scrap and fight for wins most nights.

Their effort Monday night was a welcome change.

Gordon Hayward scored 24 points as the Jazz cruised to a 110-89 victory over the Phoenix Sun in their second wire-to-wire win of the year.

"It's really nice," Hayward said. "It's nice for our legs. Just to kind of, right from the gate, jump on them and then you've got a lead and then you can just — you're not putting it in cruise control, but you're just kind of riding it out the rest of the game."

Utah opened the third quarter with a 12-0 run to push a 10-point halftime lead to 66-43. The Suns never got within single-digits afterward.

"Thought we had a lot of focus defensively tonight, that's where it was," Jazz coach Quin Snyder said. "When we're precise and committed there, usually good things happen the rest of the game. Usually we take care of the ball and do things like that.

Jazz forward Derrick Favours finished with 18 points and nine rebounds. Rodney Hood added 14 points and four rebounds. Alec Burks put a stamp on the night with a thunderous one-handed dunk over Jon Leuer with about two minutes remaining and finished with 13 points.

Brandon Knight led the Suns (12-18) with 26 points off the bench while Mirza Teletovic chipped in 17 points and seven rebounds as a reserve. The Suns starters combined for 30 points on 11-for-33 shooting from the field.

"We looked at the matchups we thought, OK, Eric (Bledsoe) did a good job on Gordon Hayward last year and Gordon kind of went off right there in the beginning," Suns coach Jeff Hornacek said. "I thought we could buy some minutes and Brandon (Knight) could come in against Trey Burke and maybe that would be a good match up."

The Jazz set a frantic pace early with a season-high 33 first-quarter points. They jumped out to a 27-9 lead with all five starters getting in the mix.

Knight started to warm up in the second quarter as the Suns chipped away and the Jazz second unit struggle to put the ball in the basket.

Jazz: Utah shot 61.9 per cent in the first quarter and 35 per cent in the second quarter. ... Hayward has scored 20-plus points in nine of the last 13 games. ... Raul Neto grabbed a career-high four rebounds. The rookie bruised his right shoulder and was taken to the locker room in the third quarter, but returned to the floor in the fourth.

The Suns started Booker and T.J. Warren in place of P.J. Tucker and Knight. "Trying to mix it up and see if we can get some life," Hornacek said. "We've done the same thing for most of the season in terms of some slow starts. I just thought those young guys could get in there with a little emotion and a little action in the beginning and it didn't happen."

The Suns host the Nuggets on Wednesday.

The Jazz travel to play the Warriors on Wednesday.