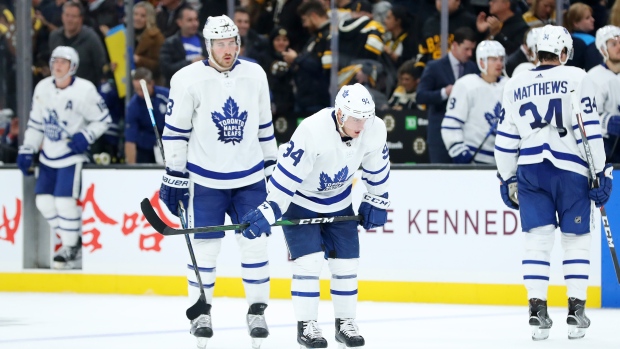 TORONTO – One month into the regular season, Maple Leafs head coach Mike Babcock says his team is still searching for its identity.

The Leafs enter November with an uninspiring 6-5-3 record, producing the 18th-best points percentage in the NHL (.536). The team sits one point behind Montreal and Florida in the Atlantic Division standings and one point out of an Eastern Conference wild-card spot.

After finishing October by losing four of their past five games, the Leafs will meet the Flyers in Philadelphia on Saturday and attempt to kick off a new month on the right foot.

By this point, new additions like Tyson Barrie, Cody Ceci, Alexander Kerfoot and Ilya Mikheyev have had ample time to settle in, and Toronto can't waste more time finding another gear.

“I'd like us to be better,” Babcock said bluntly. “But [since] we made all the transition this summer, I don't think I'm surprised. That doesn't mean you plan for that…you always try to get better and I think we’ve gotten a lot better. We’re not where we need to be. We need to get healthy; we need to get playing at a high level and get some traction.”

There’s a good chance the Leafs will have at least one body back in Saturday’s game, as John Tavares participated in his second full practice on Friday since breaking his finger Oct. 22 and will travel with the team to Philadelphia.

On the other hand, defenceman Jake Muzzin will not play against the Flyers, but Babcock said it’s due to “personal reasons” and not because of the charley horse Muzzin sustained in Tuesday’s loss to Washington.

Tavares said he was anxious to return after missing six games, but wouldn’t know for sure if he had the green light until meeting with the team’s medical staff later on Friday. Toronto has gone 2-2-2 without Tavares, while its power play slipped to 2-for-20 over those six games, and seeing his return would be a welcome boost for a club trying to turn the page onto better times.

“Suddenly we’d have two [top-line] centres, plus the man in the middle on our power play hasn’t been a left-hand shot,” said Babcock. “You're not keeping anybody off [Auston] Matthews that way, and so that would make a huge difference to us. Plus it gives us a second group on a power play because then Willy [Nylander] gets that group going, so all in all, it’ll be a huge plus.”

“Would you rather play with him, or without him? I think it's a pretty obvious answer,” added Matthews of Tavares. “We’re 14 games in and the world is like crashing down on us, but we're staying positive in this room. It's early. We’re still meshing together, with new guys, new faces. We want to take another step here in November and continue to put our best foot forward.”

Tavares agreed that working five or six new guys in on a nightly basis has contributed to the Leafs’ struggles, but said that obsessing over what’s happened so far won’t improve Toronto’s outcomes in the future.

“It's a dangerous game a little bit, just worrying so much on a daily basis where you exactly sit [in the standings],” he said. “We got a lot of new faces, and we want to get a rhythm in our game and get going. We know that we haven't played to the level that we're capable of, to our standard. We have to continue to find that consistency that’s needed night in and night out to get the results we need.”

To that end, Tavares doesn’t see the Leafs as being far off from where they have to go. Five of their eight losses this season have been by a single goal, and many of the errors being made are fixable.

The looming question now is whether the players are prepared to make the necessary adjustments needed for the team to reach its potential.

“It’s just having a higher level of execution and bearing down and everyone continuing to push each other to get to another level,” said Tavares.

“We've come out of on the wrong side of a lot of tight games. You can't say there's been more than one, maybe two [games] where we've really played very poorly; we've been right there. We’ve got to make some plays at key times and not make mistakes that cost us to finish those games off.”