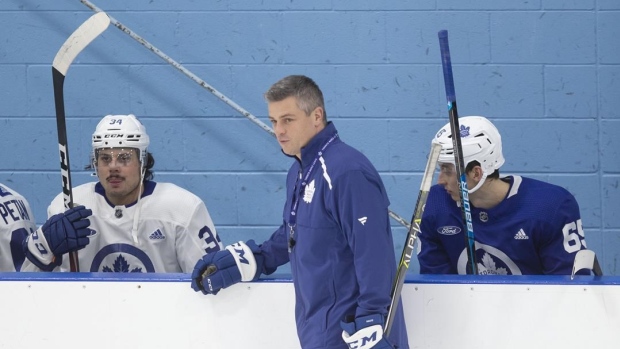 TORONTO — The Toronto Maple Leafs are close to halfway through training camp in Phase 3 of the NHL’s Return To Play Plan, and head coach Sheldon Keefe said there’s plenty his team has yet to get right ahead of next month’s playoff tournament starting up.

“We're still not anywhere near where we need to be,” Keefe told reporters on a Zoom call Saturday at Ford Performance Centre, where the Leafs played their second of five scrimmages scheduled throughout camp. “We're really focusing on our practice sessions and you're just looking for things to transfer over to the scrimmages as much as you can. We saw more in the game today than we did in the first game [on Thursday] that translated. We're just looking each day to try to build off of what we did the day before, and then we hope that it translates to the game.”

As Keefe knows all too well, time is of the essence for Toronto. If the NHL’s plan proceeds accordingly into Phase 4, the Leafs will be part of a 24-team postseason field and face the Columbus Blue Jackets in a best-of-five qualifying round series opening August 2. Toronto will have just one exhibition game prior to that against Montreal on July 28 to prepare.

In an effort to mimic the conditions ahead, Keefe and his staff designed a five-game scrimmage for Toronto to partake in during their two-week long training camp. But rather than just split the roster into two teams with equal talent levels, Keefe went a step further to up the competitive juices.

First, he made Auston Matthews and Frederik Andersen captains of each squad, separating the close friends who spent the NHL’s pause from mid-March to early June quarantined together at Matthews’ home in Scottsdale, Arizona.

The idea is to have Toronto’s best offensive talent battling its top defensive players, while the bottom-six forwards aim to make it hard on the Leafs' top-end skaters to execute. After Team Matthews’ decisive 6-2 victory Saturday, the scrimmage series is tied 1-1 overall, and Keefe hopes it only becomes more intense from here.

“The way [the teams] match up is a good thing and a healthy thing for us,” Keefe explained. “I think that the lessons should have been learned today. Getting them out of their system [and knowing] that you've got to be really good and really responsible defensively against those [top] guys or they're going to make you pay for it. If you look at the score and the fact that the Matthews team today had a lot of offence, a lot of great chances, we didn't like how those materialized. So it'll be a bit of a reflection here for Team Andersen to regroup for tomorrow.”

When there's such limited runway leading into the Leafs' shorter-than-usual opening round with Columbus, it's putting the onus on guys to take advantage of this simulated exhibition slate now against their own top-level teammates.

“It's good for players to get a chance to play against the best players in the league,” said Team Andersen's Rielly. “I think that's a great part of being teammates with those guys is that you play against them in practice. And I think that this is just another good example of them helping our team prepare for playoffs. Because they're so good, they play so hard and compete, and it makes it tough on us. We're trying to get better and prepare for a run here.”

The game action has been especially important for Andersen, and will continue to be crucial moving forward. Keefe cited Andersen as one of the Leafs’ best players in Friday’s on-ice session, but he struggled while allowing six goals in Saturday’s scrimmage.

Andersen has often said there’s no way to truly replicate what live shooters do for a goalie’s timing, and while Saturday’s result was disappointing, it gave Andersen a lot of positives to build on.

“I think I've been feeling really good in practices,” Andersen said. “I think just the game situations are for getting the timing of everything and reading plays and that's really what's kind of missing. I think these games are good for that stuff when you're trying to see live action and not just having drills that are set up. So it really works on recognizing patterns or different situations so I can react.”

Andersen got a kick out of the Leafs surprising him and Matthews with news of their team captaincies, an announcement that came replete with a hype video.

“It was fun. They obviously knew that we were spending a lot of time together out in AZ during the break so we didn't really expect it,” he said. “They just kind of threw a video of us [together], where they did some editing and I think a lot of the guys had a little chuckle at that, so that was fun and I think a good way to bring some competitiveness in this training camp.”

And that’s exactly what Keefe wanted, for his team to be in game mode well before the games actually begin. Given the unique circumstances surrounding everything about the NHL’s Return To Play, the Leafs seem to have had no trouble buying into the urgency, and will squeeze out every opportunity to improve that they can.