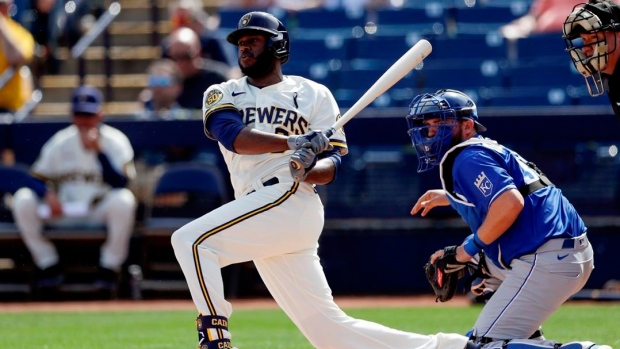 PHOENIX — Slowed by injuries last year, Milwaukee's Lorenzo Cain appeared in his first game of spring training and went 1 for 3 against Kansas City.

The 33-year-old singled in his second at-bat and caught a pair of fly balls in the first inning.

"It was fun to be out there after just working out and running and training," Cain said. "I felt pretty good with my timing, better than I thought I would as far as timing. But overall it felt good to get out there."

Only Ryan Braun and Christian Yelich have yet to play among Milwaukee's regulars.

Cain was bothered by a bruised left knee last season, when he hit .268 with 11 homers and 18 stolen bases in 148 games. He batted .320 as the Brewers went 20-7 in September and reached the post-season for the second straight year. He also won his first Gold Glove.

Cain is owed $51 million for the final three seasons of his $80 million, five-year contract. He dropped weight during the off-season.

“I definitely feel lighter out there,” he said. ”The knees felt good today, body felt really good. I got to keep putting in that work to keep this body as healthy as possible. I'll be doing a lot of work with the trainers and the strength guys this season."