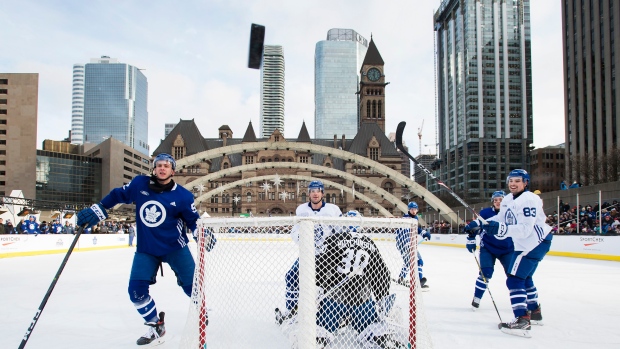 TSN Toronto reporter Kristen Shilton checks in daily with news and notes on the Maple Leafs. The team held a noon practice at Nathan Phillips Square.

Auston Matthews already owns one of the most formidable shots in the NHL, and it’s that desire to continue being among the best driving the 22-year-old to continue refining it as much as possible.

“I try to work on it all the time at practice, trying to pick different spots, try different shots,” Matthews said after the Leafs’ outdoor practice at Nathan Phillips Square on Thursday. “And obviously [Frederik Andersen] is a pretty tough guy to score on, so it's fun going up against him, and we're pretty close [off the ice] so I like scoring on him in practice and just trying to pick those different areas on the ice to shoot it.”

The work Matthews has put in is paying off on the scoresheet. He’s notched seven goals in his last six games, and on Wednesday reached the 30-goal mark for the fourth consecutive season. Matthews is the first player in Leafs’ history to hit the 30-goal plateau in each of his first four campaigns, and joins a short list of 15 NHL skaters to have ever accomplished the feat.

“He puts the work in every day; he's a hard worker,” said Jason Spezza of Matthews. “He's a guy that takes the game very seriously. I think what we're seeing is going to be a little more the norm, not so much a hot streak. I see him as a guy that can be like this all the time and [now] the puck is going in, but I think the consistency of his game has been great. That's the sign of a guy really coming into his own.”

Matthews’ 31 goals put him one behind Boston’s David Pastrnak for the league lead, and he credits being healthy for the entire season to date as a catalyst for his consistency.

Over the past two years, Matthews has missed time with injuries ranging from a concussion to a separated shoulder, but now his focus has been entirely on producing.

“I try to approach every game the same,” he explained. “Not really get too crazy out there with how you prepare or how you approach any such game. Just try to go out there and do your best, have fun. I want to create as much offence as I can and help the team win and produce.”

In order to do all that Matthews has also had to zero in on his defensive play, an area where head coach Sheldon Keefe has seen him make strides.

“I've met with Auston about that,” Keefe said. “Whether it's his intelligence that he has or his strength or speed, his instincts, those things can really help him defensively. The more that he can be good at that, he's going to have the puck that much more offensively. Last night [when he scored in the first period against Winnipeg] was a great example, but he's been doing that for quite some time here now. He's been putting in a lot of really good work on the defensive side of the puck. So I've been really happy with that.”

When he puts all those elements of his game together, Matthews can become the most dominant player on the ice.

“It's incredible the way that he's able to control a game sometimes,” said Tyson Barrie. “His shot is obviously world class. We see it all the time now. He's making big plays at big moments in the game too, which is huge. He's a special player and he's on top of his game right now, so it's fun to be a part of.”

When Keefe said after Wednesday’s 4-3 shootout loss to Winnipeg that John Tavares had been “fighting it a bit” the last couple of games, he wasn’t calling out his captain for poor play. He was identifying how the Maple Leafs captain putting too much pressure on himself was ultimately impacting his ability to execute.

“One thing I know about John is he takes his responsibility and his role on our team very seriously,” Keefe said. “He takes a lot on his shoulders and he expects himself to be able to produce. With the skill level he has, he's going to make plays and he's going to score and all that's going to happen for him. We just need him to not take on too much, and recognize that we got a lot of support around him and he can just relax and play.”

Tavares committed two turnovers in Wednesday’s loss that led directly to Jets’ goals and hasn’t produced a point in three games. But while owning up to his errors following Toronto’s most recent defeat, Tavares was also confident the bad puck luck plaguing him would break soon.

“I think obviously [there’s been] a couple mistakes here and there, but I think I've still been able to generate some good opportunities,” he said. “And if you're able to capitalize on some, it can change the way you feel. …I've have had some good looks, hit the post a couple times, had some chances in good scoring areas, but I think it's just continue to have the puck and play well in the offensive zone, defend well when you have to, continue to be strong in the faceoff circle and be hard to play against.”

Given Tavares still sits fourth on the Leafs in points with 36 (16 goals, 20 assists), and has a faceoff win percentage of 54.6, his slower stretch coming out of the Christmas break has hardly raised any alarm bells.

“Johnny's the last of our worries,” said Spezza. “We know he's going to work his way out of whatever he's going through. Over the course of an 82-game season, there's going to be ups and downs and good teams find a way to have contributions from different guys every night. There'll be lots of nights where Johnny pulls us through games and wins us games himself, so he's the least of our worries.”

When a collection of Leafs got onto the subway Thursday morning with Toronto’s other commuters, bound for Nathan Phillips Square and the team’s outdoor practice, Barrie wasn’t sure if their presence – in full gear – was welcomed by others, but he knew from experience it was the best way to get around downtown.

“I take the subway every day to the game, so I was trying to show these guys the ropes,” Barrie said. “There's a couple of pictures [people asked for], but it's pretty cool to have a team pile on there when you're just trying to get to work. Or maybe it's annoying, I'm not sure. But either way, it was a cool day.”

Toronto split up into three groups for the practice’s 3-on-3 tournament based on a player’s region of origin, falling into Team East, Team West or Team Ontario.

Andersen watched the action in street clothes from the bench (he did an on-ice workout beforehand), leaving Michael Hutchinson and practice goalie David Ayres to man the nets. After a hotly contested round-robin and semifinal, Team East defeated Team Ontario for the title, which left a sour taste for Barrie and his third-seed Team West.

“I think anytime you get a group together and you put something on the line and people are watching, it's going to get competitive,” he said. “Would have been nice to see Hutchy make a save. He kind of ruined it for our whole team, but whatever, it's not a big deal. I'm not a big finger-pointer.”

All jokes aside, it was nice for the Leafs to enjoy some fresh air and a different practice format amid a busy stretch of games.

“It was fun,” said Keefe. “Great to see the fans out there and just to see our players have smiles on their faces and out there enjoying themselves. Nice little experience to break up our week and really break up our season.”

“It’s a lot less serious, and a lot of us grew up being able to play outside and just play shinny with our friends, so it was great,” added Tavares. “And with the way that the team is intertwined with the city and the community, it’s such a big tradition and big history.”

Thursday was the first time Keefe had been back to Nathan Phillips Square since the Toronto Raptors’ championship parade in June.

“I went at about 6:30 in the morning, just to get a feel for it,” Keefe said. “I got out of there – my family was in a different area when the actual parade was coming through – but I wanted to go and see what it would look like at City Hall there.”

Keefe said the Leafs are planning to bring injured forward Andreas Johnsson with them to Florida on Friday, so he can practice with the team on Saturday and even possibly play on Sunday against the Panthers. Johnsson hasn't played since hurting his leg on Dec. 4.

“We have no determination yet on what's going to happen for him in terms of the game,” Keefe cautioned. “But he's going to be out there and get to practice with us and we're getting more towards the day-to-day type of stage for him.”