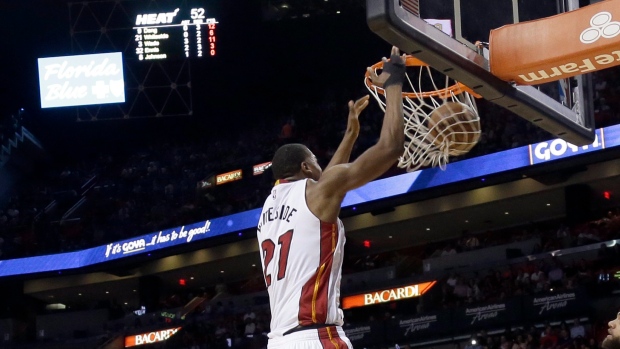 MIAMI - For the Miami Heat, there is still playoff hope.

They have Hassan Whiteside, Dwyane Wade and the Chicago Bulls to thank for that. Maybe even Chris Bosh's birthday party, too.

Whiteside tied a career high with 24 points and grabbed 13 rebounds, Wade scored 22 points and the Heat kept their slim post-season hopes alive with a 100-93 win over the Orlando Magic on Monday night.

"So you're saying there's a chance," Heat coach Erik Spoelstra deadpanned as he began his postgame media session.

Luol Deng scored 14 points and Goran Dragic finished with 13 points, eight assists and seven rebounds for the Heat, who still need a win at Philadelphia on Wednesday and help in three other games to make the post-season for the seventh straight year. Brooklyn could have eliminated Miami on Monday with a win, but the Nets lost at home to the Bulls.

"We just came in playing as hard as we could," Whiteside said. "The fans deserve 100 per cent effort from us. We're not going to sit there and back down because of the standings. We're going to try to win as many games as we can ... we still hope."

Miami had a 22-point lead whittled down to six in the final minute. But Deng made a 3-pointer with 32.6 seconds left to snap a streak of nine straight Miami misses, and the Heat held on.

Victor Oladipo scored 30 points for the Magic. Tobias Harris had 26 and Elfrid Payton scored 10 for Orlando, which ends its season Wednesday at Brooklyn.

"Throughout this whole year we never really got good consistency in our play and winning games," Harris said. "Consistency comes from discipline."

So forget how Miami had lost nine of its last 12 coming into Monday. Forget that LeBron James left in July after four straight NBA Finals trips, Josh McRoberts hurt a knee in December and Bosh had his season end because of blood clots on one of his lungs in a scary February episode.

After all that, and more, the Heat remain alive.

"We've still got another opportunity," Wade said. "And around here, we believe in opportunities. Look at our roster."

There's only one scenario where Miami would get in, in four parts. On Tuesday, Washington must beat Indiana. Then on Wednesday, not only would Miami have to win in Philadelphia, but Orlando would have to beat Brooklyn and Memphis would have to down the Pacers.

Improbable, but not impossible.

"You've got to play it out," said Spoelstra, who got career win No. 350. "Things have to go all the way to completion. You reveal your character when the odds are stacked against you."

The Heat gathered for Bosh's birthday party on Sunday night, and said blowing off some steam proved helpful.

"Everybody came together, got a chance to get away from it and enjoy ourselves for a night," Wade said. "He throws a hell of a shindig and we all enjoyed it."

Magic: Orlando has lost 12 of 13 to Miami. ... The Magic held out shooting guard Evan Fournier, who has appeared in only two of his team's last 22 games because of a sore right hip. "We want him healthy for the summer," coach James Borrego said. ... Monday marked the 25th anniversary of Orlando's 117-102 loss at Minnesota, notable because it was played at the Metrodome before 45,458.

Heat: Miami finished 20-21 at home. ... Whiteside had a double-double by halftime for the fourth time this season, and for the second straight game. ... A fan won a waverunner at during a first-half stoppage in play, by making a shot from midcourt. ... Miami had 57 points at halftime, getting to 50 by the break for the fourth straight game — matching a season best — and sixth out of the last seven.

Miami has now sold out 197 consecutive regular-season games, 246 when including the playoffs. Wade addressed the crowd pre-game, saying "We want to thank you guys for your support through the highs, through the in-betweens and especially the lows. We appreciate you guys and we couldn't do anything without y'all. So simply, thank you."

Miami had a season-high 66 points in the paint, and outrebounded the Magic 50-41.

Magic: At Brooklyn on Wednesday.

Heat: At Philadelphia on Wednesday.