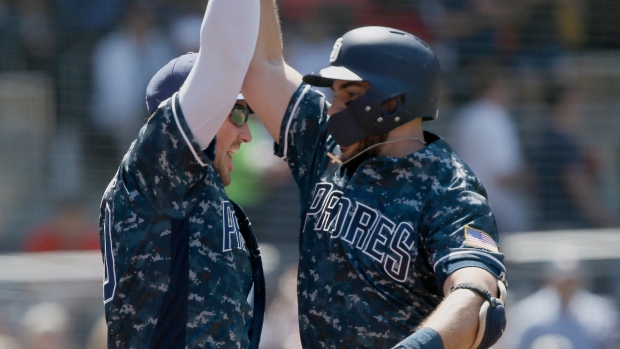 SAN DIEGO — It had been a week since the San Diego Padres had a lead and slightly longer since they'd won a game.

Austin Hedges homered and Wil Myers hit a go-ahead, two-run double in the four-run third inning for the Padres, who beat the Cincinnati Reds 4-3 on Sunday to snap a six-game losing streak.

Myers' double to left off Tyler Mahle gave the Padres their first lead since April 14. They hadn't led since taking a 1-0 advantage in the first inning at Arizona in a game they'd lose 8-4. They returned home and lost two to Colorado before dropping the first three games of this series.

The losing streak dropped the Padres from a three-game lead atop the NL West to second place, 2 1/2 games behind Los Angeles.

San Diego scored only 13 runs during those six losses.

Left-hander Joey Lucchesi (3-2) stopped the skid by holding the Reds to one run and five hits in 5 2/3 innings. He struck out eight and walked two. Kirby Yates pitched the ninth for his 10th save in as many chances.

Mahle (0-2) allowed four runs and seven hits in six innings, struck out nine and walked none.

The Reds jumped ahead for the fourth straight game when Jose Iglesias' infield single with one out in the second brought in Matt Kemp, aboard on a leadoff double to left.

Hedges tied it by homering to left leading off the third, his third. Mahle struck out Lucchesi but then allowed five straight hits that led to three more runs.

Rookie Fernando Tatis Jr. extended his hitting streak to 10 games before being thrown out trying to steal second base. The Padres appealed, but the call was upheld after a review of 3 minutes, 12 seconds. Manuel Margot and Manny Machado singled ahead of Myers, who doubled to left as Kemp slammed into the wall trying to make the catch. Kemp came out of the game an inning later. Eric Hosmer followed by doubling in Myers for a 4-1 lead.

"It just takes one inning, takes one swing," Myers said. "You're always closer than you think. It was nice today to get that inning going."

The Reds pulled within one after home runs by Kyle Farmer and Eugenio Suarez in the seventh. Farmer's third came off Brad Wieck and Suarez's fifth was off Craig Stammen.

"Good pitching, one inning for Tyler, other than that he was really good," Bell added. "Good defence too; Yasiel (Puig) made some really great plays in right field. A lot of things allowed us to stay in the game and almost come back and send it to extra innings."

Bell was Kemp "was a little dazed, but he was adamant about staying in the game" after trying to catch Myers' drive to left. "I knew he was in a little bit of pain. We were just hoping it was a temporary thing, but after he came back in from hitting it was pretty obvious that we needed to get him out of there."

Bell said Kemp was getting his chest examined after the game. "He's a tough guy and he went into the wall hard and almost came up with a great catch."

Reds: 1B Joey Votto was out of the starting lineup for the second straight day with a tight back. He was available to pinch-hit. The Reds are off Monday, giving Votto more time to recover.

Padres: 1B Hosmer was in the lineup a day after needing nine stitches to close a cut over his right eye. He said he felt light-headed after using the sauna in the clubhouse and passed out. ... CF Manuel Margot returned from paternity leave and 2B Luis Urias was optioned to Triple-A El Paso. The Padres also recalled LHP Robbie Erlin from Class A Lake Elsinore and optioned RHP Phil Maton to El Paso.

Reds: RHP Sonny Gray (0-3, 2.79) is scheduled to start the opener of a three-game home series against Atlanta on Tuesday night. The Braves are expected to counter with RHP Kevin Gausman (1-1, 2.75).