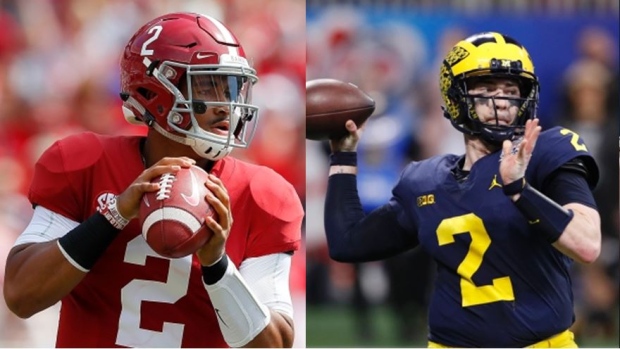 Canadian Football League teams unveiled 10 players from their negotiation lists Thursday, with two of the top NCAA quarterbacks highlighting the group of players.

Heisman Trophy hopefuls Jalen Hurts and Shea Patterson were among the 90 players unveiled Thursday, with Hurts on the Hamilton Tiger-Cats’ negotiation list and Patterson on the BC Lions’.

Hurts will follow the two previous Heisman winners in Kyler Murray (2018) and Baker Mayfield (2017) as the starting quarterback at Oklahoma after transferring from Alabama. He has the fourth best odds to win the Heisman via Bodog.

Patterson is the starting quarterback at Michigan, where the Wolverines have College Football Playoff aspirations. He has the 10th best odds via Bodog to win the Heisman.

There were a number of other current and former NCAA stars among the 90 players unveiled including Missouri quarterback Kelly Bryant (Winnipeg Blue Bombers), who played for the national champion Clemson Tigers last year, and Houston quarterback D’Eriq King (Saskatchewan Roughriders), who is listed by Bodog as a Top 20 Heisman candidate.

Quarterback Brett Rypien was unveiled as part of the Lions’ list after an impressive college career at Boise State. The Calgary Stampeders unveiled both Jake Browning, the 2016 PAC-12 Offensive Player of the Year while at Washington, and former Penn State QB Trace McSorley, a three-time second-team All-Big 10 selection.

A number of NFL veterans were among the names unveiled as well, including quarterback Garrett Gilbert, running backs Knile Davis and Charcandrick West, and wide receiver Jaelon Strong.

While the college players won’t be available to sign in the CFL for at least a year, NFL training camp cuts are less than three weeks away – NFL teams must pare their rosters down to 53 players August 31 – which could lead to some negotiation list players becoming available. CFL general managers could be looking to strengthen their roster for the second half of the season come early September.

The 10 players unveiled on each CFL team’s negotiation list: