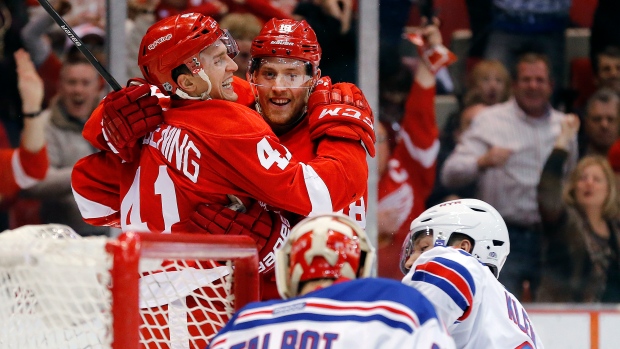 Helm's wrist shot past Cam Talbot broke a 2-2 tie midway through the third period and capped a three-goal comeback that lifted the Red Wings to their second straight win. Jimmy Howard had 27 saves.

Talbot made 31 saves for the Rangers, who lost after a four-day layoff.

Detroit was shorthanded for more than five minutes late in the third after three consecutive penalties, including Kyle Quincey's 4-minute high-sticking offence, but allowed just three shots to keep the lead.

"That was huge. It showed a lot of character by our guys. A lot of heart," Howard said after his 13th win. "We found a way. That's all that matters."

"Our power play guys had the opportunity to at least tie it up and didn't get it done," he said.

Kevin Klein opened the scoring and Rick Nash added his 17 goal to send New York to the first intermission with a 2-0 lead but Detroit's Riley Sheahan and Luke Glendening scored a minute apart in the second to tie the score.

"We were in control of the game, I thought," Rangers defenceman Dan Boyle said. "Then they get two goals in I don't know how many seconds."

Rangers forward Carl Hagelin received a double-minor penalty early in the first for high-sticking Brendan Smith but the Red Wings managed just a single shot during the power play.

The victory followed a familiar script for Detroit, which kept within reach of Atlantic Division leaders Tampa Bay and Montreal despite several games that featured poor starts.

"We've been doing a lot of that but we've got to get better in the first period," said Glendening, a fourth-liner who scored for just the third time this season. "It's going to catch up to us eventually, having to put so much energy in the second and third periods."

Babcock's milestone for wins tied Hall of Famer Toe Blake for 18th on the all-time list.

"When you start in the league you're hoping to coach 82 games. Just hoping to get through and not get fired. I've coached a lot of good players," Babcock said. "It's been enjoyable.

"I love it as much and maybe more than the day I started and maybe they'll let me keep doing it."

Babcock, the longest tenured coach in the NHL, led Detroit to the 2008 Stanley Cup and has guided Canada to a pair of Olympic gold medals.