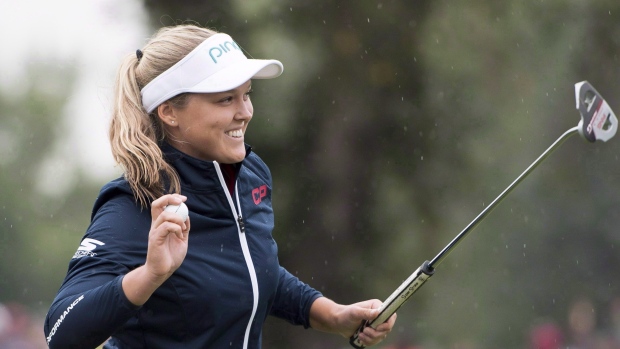 With all that Brooke Henderson accomplished in 2018, one of the biggest moments came in September when she turned 21. Yup, she was finally of age to rent a car in the United States.

Okay, so that might not have the top moment for her in a year of remarkable achievements, but it does put into perspective just how much she’s done at such a young age.

Last year, the Smiths Falls, Ont., product thrilled fans by ending a 45-year drought by becoming the first Canadian woman since Jocelyne Bourassa to win the national championship. That, coupled with her stellar season on the LPGA Tour, made her an easy choice to be named winner of the Bobbie Rosenfeld Award as the Canadian Press Female Athlete of the Year.

“Amazing,” said Henderson. “It’s really unexpected. I had a great year and the CP Women’s Open was certainly a huge highlight – the highlight of my career – but there are just so many amazing athletes across the country who’ve done great things, so it’s a real honour to win.”

It marked the third time in the last four years that she’s won the award.

In addition to capturing the Canadian title at the Wascana Golf and Country Club in Regina, Henderson won the Lotte Championship in Hawaii in April and finished the year with 11 top-10 finishes. She was ranked ninth in the world at year’s end, a mark that, due to an awkward scoring system, doesn’t reflect her true position among the world’s best.

Her two wins gave her seven in her brief career, pushing her to within one of the record for Canadian golfers on either the LPGA or PGA Tour. George Knudson, Mike Weir and Sandra Post each have eight.

“I feel like I’ve had a very successful career so far and 2018 was a very big year for me,” she stated. “Hopefully I’m just beginning to trend and continuing to get better but at this point in my career, I’ve only been on Tour, well this will be my fourth year. It’s pretty crazy to think I’d already be considered in the same ballpark as those other names.”

Canadian fans would likely disagree. Henderson has become the premier female athlete in the country. Her popularity has spread well past Canada’s borders and also led to a slew of high-profile sponsorship deals. She even has her own legion of young girls who follow her every move, known as the Brookalikes.

As she takes some well-deserved downtime after a frenetic season that saw her play 28 tournaments in 13 countries, Henderson reflected on her achievements while also casting an eye on next season.

“Scoring average is a big thing for me,” she admitted. “I was under 70 for the first time this year with 69.9 so that was awesome. I think that if I could get my scoring average back to something close to that I feel like good things will probably happen.”

Another goal for Henderson is to have a multi-win season. She’s won twice each of the last two years and would love to continue that streak. She has also targeted the tour’s major championships but recognizes how difficult they are to win. To do all that, she knows she needs to shore up her short game.

“I feel like this year I made big gains with my wedge game so hopefully I can continue that in the off-season,” she said. “Another big part is putting, which I’ve been working on for a long time. I feel that nobody ever really perfects putting. I just have to kind of continue to work with my dad [who serves as her coach] to see the line better and make my stroke a little bit more consistent. All in all I feel like things are going in the right direction.”

All that work took a back seat to some Christmas holiday time at home where she and her sister Brittany did some very Canadian things. She went to an Ottawa Senators game where she received a standing ovation when she did the ceremonial puck drop. She and her family also went curling, perhaps with an eye on one day joining another Ottawa-area sports phenom, the Rachel Homan rink.

After that, it was back to her winter base in Naples, Fla., where she’ll get ready for what she hopes is another award-winning season. She gets underway at the Diamond Resorts Tournament of Champions in Lake Buena Vista, Fla., on Jan. 17.