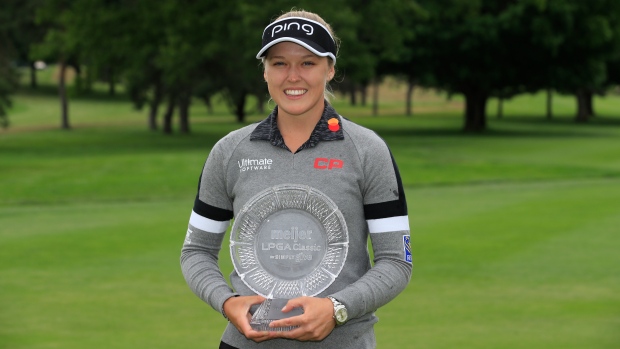 If the Raptors' win in the NBA finals made them the Kings of the North, then Brooke Henderson’s ninth LPGA Tour victory has turned her into the Queen of Canadian golf.

Henderson took top spot at the Meijer LPGA Classic, holding on for a one-shot victory over three other golfers, including Lexi Thompson. The victory not only means she’ll have to buttress her trophy shelf, but it made her the winningest Canadian golfer on either the LPGA or PGA tours, passing George Knudson, Sandra Post and Mike Weir who were tied with eight.

Did we mention that Henderson is 21?

Even at that tender age, setting the record is no surprise. For some time now, it’s been a question of when, not if, she would do it. Henderson has been making history for most of her brief career.

She won a professional tournament at the age of 14, beating out some seasoned golfers on the now-defunct Canadian women’s tour.

At 17, Henderson captured her first LPGA Tour event at the Cambia Portland Classic. That win gave her full membership on the women’s circuit and in each of her four seasons, she’s won multiple times.

Now, she’s eased past three Canadian legends to the top of the list.

“You know, earlier this year to get my eighth win and to tie that record was a huge deal for me,” said Henderson, who admitted to being a passionate Raptors fan and following them throughout their playoff run. “To now kind of break through that is awesome and I'm just really excited for the rest of the summer and hopefully many more wins in the future.”

Even those she passed in the record book were impressed by the performance of a woman barely old enough to drink in the United States.

“She’s such a talent,” said Weir. “A ninth win at such a young age is just awesome.”

Henderson’s game is built on an aggressive style of play. She rarely holds back, hitting driver at almost every possibility. She takes on risks without hesitation and when her putter co-operates -- she frequently switches up putters to find one that will pay attention on a particular week – she is close to unbeatable.

In her latest win, Henderson started on record pace, shooting consecutive rounds of 64 to establish a 36-hole scoring record. She followed up with a round of 69 and then on Sunday, eased out to a lead that climbed to as many as three shots. By the time she stood on the final tee, she was ahead by a single shot. And nerves were definitely creeping in.

“When I was walking up [18] I thought maybe I would have to birdie or eagle this hole to get the job done,” said Henderson, “but when I looked at the scoreboard I was sort of shocked that all I needed to do was three-putt and par. So I'm really grateful about that because I don't know, it was pretty -- I was shaking pretty bad on those last couple putts.”

She reached the par-5 hole in two shots and used three putts to guide the ball into the hole, securing the win and earning a champagne shower from her family and fellow Canadian Alena Sharp.

It’s unlikely nine wins will be the limit for Henderson. With many years of golf ahead of her she could easily double or triple the number of victories on her resume. The Queen is set for a long reign.