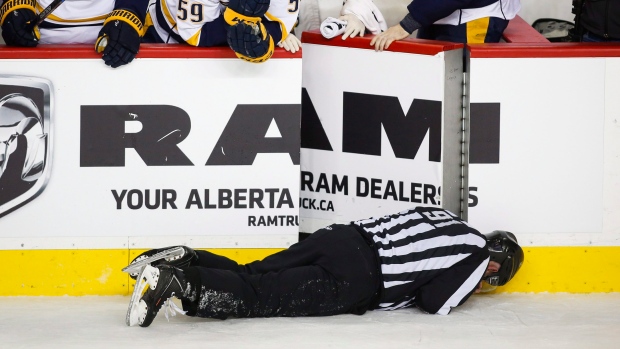 CALGARY — A judge has ordered NHL linesman Don Henderson to pay the Calgary Flames and defenceman Dennis Wideman a total of $11,000 to cover a portion of their legal costs in connection with his failed lawsuit.

Henderson had filed a lawsuit against the NHL, the Flames and Wideman seeking $10.5 million in damages.

The linesman suffered permanent back and shoulder problems, a concussion and depression after Wideman struck him from behind during a game between the Flames and the Nashville Predators in January 2016.

The judge ruled the case should be heard by the NHL and not the court system.

Henderson was ordered to pay Wideman $3,000 and the Flames $8,000. The NHL did not seek compensation for its legal costs.

The NHL suspended Wideman for 20 games in connection with the incident.