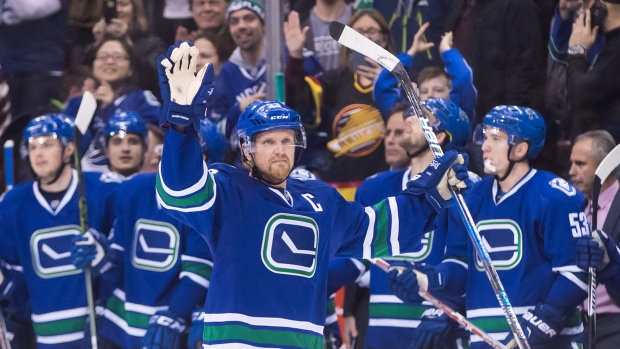 The Vancouver captain recorded the 1,000th point of his NHL career on a goal in the second period before Luca Sbisa scored the winner in the third as the Canucks defeated the Florida Panthers 2-1 on Friday night.

With the Canucks down 1-0, Sedin won a faceoff in the defensive zone as part of a sequence that eventually resulted in Alexander Edler finding Henrik's twin brother Daniel in stride for a 2-on-1 rush.

With his 36-year-old legs churning, Henrik Sedin took a pass from Daniel and moved in alone on Florida goalie and former Vancouver teammate Roberto Luongo before sliding a backhand through the five-hole.

"When I got the breakaway I didn't really know what to do," said Sedin. "I think Lu thought I was going to go upstairs, but it was nice to see it go in."

The Canucks spilled over the boards to mob their leader as the crowd at Rogers Arena roared its approval with 5:50 gone in the second, a noise level not heard in the building for quite some time.

"When I saw my teammates come on the ice, I lost it a little bit," said Sedin. "It was very special. If I retired today, I think that was the most memorable moment for me as a player."

Luongo, who played in Vancouver from 2006 to 2014, then stopped Sedin to offer his congratulations as the fans continued their salute.

"It was awesome to see that play — Eagle to Danny to Hank ... on Lu," said Canucks goalie Ryan Miller, who finished with 34 saves. "It was a beautiful play to kind of cap it off."

Sedin is the 85th player in NHL history record 1,000 points, and just the 38th to accomplish the feat with one franchise.

"I didn't know how to feel," Luongo said of Sedin's goal. "Obviously I was happy for Hank, but not too happy for myself that I let that in."

Sedin came in with a goal and two assists over his last three games to get to 999 points after going scoreless in the four previous contests.

"It's been a very long ride, but a fun ride," he said. "All the teammates and linemates we've had, they've all given us something and made us better."

As for the rest of the game, Sbisa snapped a 1-1 tie at 3:07 of the third on his second goal of the year after the puck fell to him in the slot on broken play.

Florida came close on a chance for Reilly Smith midway through the period, but Miller was there to make the save.

Daniel Sedin, who sits at 968 points, had a chance to get closer to 1,000 himself, but his uncontested shot at the empty net with 40 seconds left hit the post. Vancouver still managed to hold on from there to pick up a second consecutive victory after an 0-1-3 stretch.

"We've been close in most games," said Henrik Sedin, who has 233 goals and 767 assists in his 16 seasons. "It hasn't been many games where we've walked away being disappointed with the effort."

Playing their third game in four nights, the Panthers entered Friday on a 1-2-1 run following a 4-3 overtime loss to Edmonton on Wednesday, and grabbed a 1-0 lead at 3:45 of the second. Jared McCann followed up his own rebound with a slick pass out front to Jagr, who buried his ninth of the season, and the 758th of his career.

Vancouver traded McCann, a first-round pick back in 2014, to Florida last spring in a deal for defenceman Erik Gudbranson, who is out long-term after undergoing wrist surgery.

The Canucks had the majority of the chances in the first, with the crowd buzzing every time Henrik Sedin touched the puck.

He came close to getting to 1,000 points with under four minute to go, but a sprawling Luongo robbed Loui Eriksson after he took a pass from Sedin in front.

Fans dusted off the old "Luuuuu" chant after the save, a chorus that often rang around the building during the netminder's tenure with the Canucks, but Sedin would eventually get the last laugh.

"I don't know if you can really envision it," said Sedin. "I think the best part by far was my teammates coming out on the ice and celebrating with me. That's something I will remember forever."

Notes: Henrik Sedin's first NHL point came against the Panthers back on Oct. 6, 2000, an assist in a 4-3 win. ... The Canucks play at Chicago on Sunday before visiting Colorado and Arizona next week. ... Florida concludes a four-game road trip Monday at Arizona.