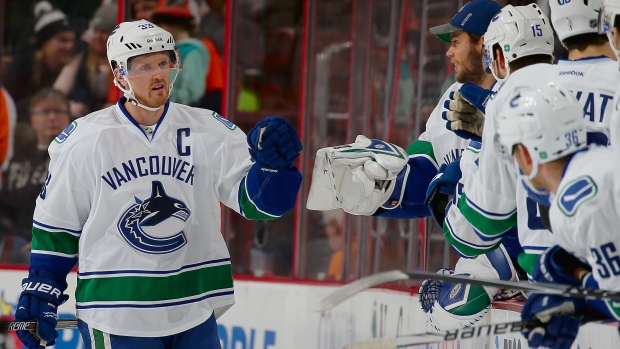 NEW YORK, N.Y. - Playing without three of their top defenceman, the Vancouver Canucks had one of those character games that might help them get back to the playoffs.

Alexandre Burrows and Radim Vrbata scored in a shootout and the Canucks rallied three times to post a 5-4 victory over the Rangers on Thursday night, ending New York's four-game winning streak.

"This was huge," Burrows said. "Rangers are probably one of the best teams in the league, if not the best. They are a really good team, but we felt if we could skate with them and work hard and pay the price, we could have a chance."

The Canucks, battling for a playoff spot in a tight Western Conference, got several big efforts. Ryan Miller made 30 saves and stopped both Rangers' shootout attempts. Henrik Sedin scored twice, including a tying tally on a rebound with 2:00 left in regulation after Vancouver pulled Miller early. And youngsters Ronalds Kenins and Bo Horvat combined on a beautiful goal.

"This was really big for us; the determination was there," said Miller, who stopped Mats Zuccarello and Derek Stepan in the shootout. "It was great. Our guys got better each period. For us, it's great to have a comeback. You have to win all ways during the season and for me, the guys bailed me out. They gave me a lead and I let it go. It didn't faze them. They came right back and wanted to get that win."

Shawn Matthias and Horvat also tallied as Vancouver snapped a five-game losing streak against the Rangers dating to January 2011.

Stepan, Rick Nash, Martin St. Louis and Carl Hagelin scored for the Rangers. Cam Talbot made 24 saves for New York but he was beaten on both shootout attempts.

"Any time you score four goals you want to win the game," Talbot said. "Obviously you never want to give up chances like that and goals like that. Four goals should be enough most nights, and that's on me."

Burrows beat Talbot with a forehand shot after Zuccarello was outwaited by a patient Miller. Vrbata ended the game with a top-shelf backhander.

Sedin tied the game late, putting the rebound of Dan Hamhuis' shot into an empty net. Sedin had given the Canucks a 3-2 lead — their first of the game — with a tip-in for a power-play goal at 3:55 of the third period. Adam Clendening had the shot from the right point that Sedin tipped from in front of Talbot.

A little more than a minute later, St. Louis tied the game with his second goal in as many games after a 15-game drought. Stepan made a cross-ice pass that St. Louis jumped over at the blue line, collected after it hit off the sideboards, and then raced around Hamhuis. He beat Miller with a forehand shot that handcuffed the goaltender.

Hagelin, who also had an assist on the St. Louis goal, put New York ahead 21 seconds later after a turnover by Henrik Sedin. Dan Girardi intercepted the backhand pass and Hagelin redirected his shot past Miller.

The Rangers twice took one-goal leads only to see the Canucks come back.

Stepan opened the scoring with his 11th goal of the season on a bang-bang play. Girardi sent the puck behind the net and St. Louis found Stepan alone between the circles for a snap shot.

The Canucks tied the game less than two minutes into the second period when Matthias collected a loose puck in the left circle and fired it in with Talbot out of position.

Nash put New York ahead 2-1 with his 36th goal. Derick Brassard got the puck in centre ice following a turnover and found Nash alone at the left point. The All-Star skated into the circle and beat Miller between the pads at 11:00.

A little more than two minutes later, Horvat tied it, capping an odd-man rush by redirecting a pass by Ronalds Kenens over Talbot.

"Sometimes you have to give credit to the opposition," Rangers coach Alain Vigneault said. "They were short a couple of players, especially on the back end. A few of their players raised their level. We had a lot of guys that played all right, but not good enough to win."

NOTES: Talbot was making his eighth straight start since Henrik Lundqvist was put on injured reserve with a neck injury. ... The Canucks had a 4-0 shot edge in the opening 2:46. They had one the rest of the period. ...This was the start of a five-game road trip for Vancouver, with the next two games against the Devils and Islanders. ... Sedin's power-play goal was the Canucks' first in six games. ... Stepan has two goals and five assists in his last three games. ... New York has points in six straight games (4-0-2) and 29 of 38 (27-9-2). ... Vancouver D Alexander Edler, Kevin Bieksa and Christopher Tanev are hurt.