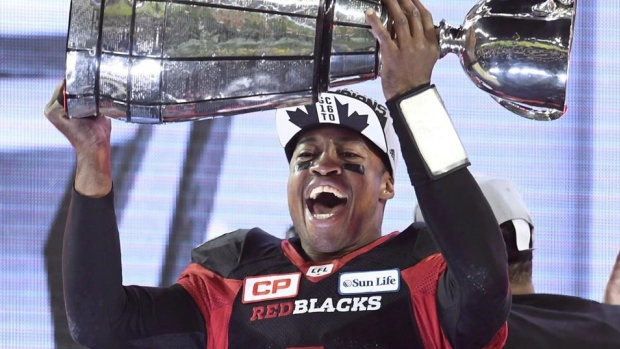 For one of the few times in his life, Henry Burris was left speechless.

The 18-year veteran quarterback headlines the Canadian Football Hall of Fame's 2020 class that was unveiled Thursday. Burris, 45, got the nod in his first year of eligibility, becoming just the 21st player ever to do so but second in as many years after Calgary running back Jon Cornish in 2019.

Burris's family — wife Nicole and sons Armand and Barron — had known of his induction since February but managed to keep quiet about it until about two and a half weeks ago when the Hall of Fame informed Burris. Even then, the Burris clan was very nonchalant in asking the former quarterback to take in what he thought was a run-of-the-mill video.

Instead, Burris watched Hall of Famer Damon Allen (2012) outline his pro football journey to Canada, which drew a rather bewildered look from Burris. Then Allen detailed Burris's stellar CFL career before Mark DeNobile, the Hall of Fame's executive director, delivered the big news.

And the player, affectionately dubbed Smilin' Hank because of his outgoing personality, was lost for words as tears streamed down his face.

"Yeah, they got me good," Burris said with a chuckle. "What's funny is whenever I've told the boys to keep anything quiet, they've always gone back to their mother and yet they didn't say a peep about this.

"I was lost for words just because to hear it shows you that people appreciated the things you did throughout your career. This is the way for the league and all the organizations and the fans saying, 'Thank you,' and for me I'm humbled by it . . . there's so many guys in there (Hall of Fame) who I looked up to and now to be able to join them is a dream come true."

Burris retired shortly after leading Ottawa to a thrilling 39-33 overtime Grey Cup upset win over Calgary. He threw for 461 yards and three TDs despite suffering a knee injury during warmups.

Burris said his Hall of Fame induction is as much a testament to his family's resilience and perseverance as it is his on-field accomplishments.

"I had to take my wife all over Canada, drag my kids all over Canada and force them to make new friends just for dad to be able to play this game called football," said Burris, whose family still calls Ottawa home. "And for them to understand and see just the emotions that ran through me . . . it just shows how big that moment is, just kind of when your whole life flashes before you."

Burris and the other inductees will have to wait for their day in the sun due to the COVID-19 pandemic. The 2020 class will be honoured alongside the 2021 inductees next August.

When Burris is formally honoured, he'll be joined by former teammate Childress and Hufnagel, who served as Calgary's head coach (2008-2015) before moving into the front office full-time. Burris won Grey Cups with both ('98 with Childress, '08 with Hufnagel).

"Calgary is a machine right now and it all started in 2008 when Huf came in and we got that Grey Cup in his first year," Burris said. "Calgary has always had double-digit wins and been in the playoffs each and every year Huf has been there, they've always been a strong contender for the Grey Cup and there's one reason why."

Brock, 79, of Los Angeles, played 12 seasons with Saskatchewan (1964-75), helping the club win its first Grey Cup in 1966. The former Dallas Cowboy-San Francisco 49er appeared in 169 regular-season CFL games and four times was named a league all-star before being inducted into Saskatchewan's Plaza of Honour in 1995.

Vavra, 59, of Red Deer, Alta., helped the Calgary Dinos win the Vanier Cup in 1983, his final season at the school. That year, he also became the first player in the program's history to capture the Hec Crighton Trophy as Canadian university football's top player and still holds the U Sports record for most passing yards in a game (627).

The Atlantic Bowl was renamed the Uteck Bowl in 2003.