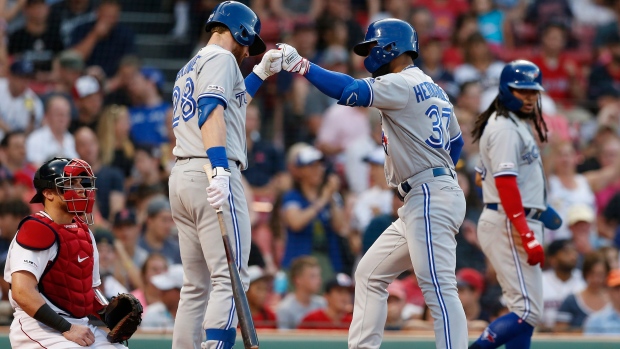 BOSTON — Toronto pitcher Jacob Waguespack spent the day before his first major league start as a tourist in Fenway Park, signing his name inside the Green Monster and FaceTiming his high school coaches from the dugout.

When the time came for him to take the mound, it was the Red Sox who were caught looking.

The Blue Jays right-hander limited the defending World Series champions to one run before they figured him out in the fifth inning, and Toronto pounded new Boston starter Andrew Cashner for a 10-4 victory on Tuesday night.

Teoscar Hernández hit a three-run homer, and Lourdes Gurriel Jr. had a single, double and triple for the Blue Jays, who lost three of their previous four games.

"First time in Boston. It's great to pitch in Fenway Park," said Waguespack, whose father, stepmother, brothers and girlfriend were there to see him. "It gets pretty loud when you give up runs. So hopefully it will be a little better next time."

Justin Smoak also homered for Toronto, which led 4-1 before the Red Sox tied it and chased Waguespack in the fifth. The Blue Jays took the lead right back with two runs in the sixth, and then added four in the ninth.

"The one thing about the big leagues: You face a lineup for the third time and they usually get you," Toronto manager Charlie Montoyo said. "And they did."

Cashner (9-4) was acquired from the Orioles on Saturday to help bolster the Boston rotation, but quickly fell behind 4-1 and then failed to get an out in the sixth.

In all, the bushy-bearded right-hander allowed six runs — five earned — on eight hits and two walks, striking out two. He also gave up two homers, hit a batter and threw a wild pitch on a third strike that allowed Hernández to reach first.

Xander Bogaerts had a single, double and home run, and Mookie Betts also had three hits for Boston, which fell 10 games behind the first-place New York Yankees in the AL East.

Waguespack allowed four runs on six hits and three walks, striking out two and blowing a 4-1 lead in the fifth when Betts hit a two-run single and scored when Bogaerts singled to end Waguespack's night. Justin Shafer (1-1) got J.D. Martinez to end the inning.

Then Cashner gave the lead back in the sixth.

"It wasn't very good, especially after we scored those runs to tie the game back up and give up a leadoff homer," he said. "So that's probably the toughest blow of the game."

Smoak hit the first pitch out to right-centre, and Freddy Galvis singled to chase Cashner. Hernández reached on a fielder's choice, went from first to third on a bad pickoff attempt by reliever Josh Taylor and scored on a wild pitch to make it 6-4.

"We got him out, and we throw the ball away, and then the wild pitch," Red Sox manager Alex Cora said. "They have to earn it, and we just gave it to them."

Shafer allowed the first two batters to reach in the sixth before leaving with two out and two on. Tim Mayza struck out Sam Travis to protect the lead.

Bogaerts matched Ted Williams as the only Red Sox players with at least one hit, one run and one RBI in eight straight games. (Williams did it twice, including an 11-game streak in 1950.)

Betts, who leads the majors with 83 runs, has scored at least once in each of his last 11 games, the longest streak by a Red Sox player since Kevin Youkilis scored in 11 straight in 2006.

Blue Jays: Designated RHP Edwin Jackson for assignment to make room on the roster for Waguespack. Jackson was 1-5 with an 11.12 ERA this season for Toronto, his record 14th major league team over a 17-year career in which he has thrown a no-hitter (White Sox, 2010), made an All-Star team (Detroit, 2009) and won a World Series (St. Louis, 2011).

Blue Jays: Gurriel was hit in the helmet by the throw from the catcher when he stole second in the ninth. He remained in the game and scored to make it 9-4 when Randal Grichuk doubled on the next pitch. ... LHP Ryan Borucki threw six innings in his second injury rehab appearance with Triple-A Buffalo. He allowed three runs on five hits and a walk, striking out six.

Red Sox: 1B Mitch Moreland (strained right quad) had a full workout and is scheduled to rehab at Triple-A Pawtucket on Wednesday. ... RHP Nathan Eovaldi (elbow) is scheduled for a rehab outing either Wednesday or Thursday, depending on the weather.

RHP Aaron Sanchez (3-13) starts for the Blue Jays in Game 3 of the four-game series against LHP Eduardo Rodriguez (10-4).