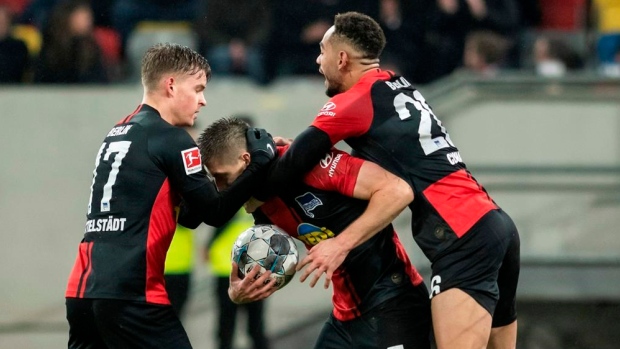 BERLIN — Hertha Berlin fought back from three goals down to draw at Fortuna Düsseldorf 3-3 in the Bundesliga on Friday, saving face just as it seemed its horror week would continue.

Hertha, which lost 5-0 at home to Cologne last Saturday, was left reeling on Wednesday when details were published from former coach Jürgen Klinsmann's journal, in which he criticized nearly every aspect of the club from players to management. He said general manager Michael Preetz was responsible for “catastrophic failures” and had a “culture of lying.”

Klinsmann quit the club abruptly in a Facebook post on Feb. 11, shocking those in charge, who had been spending time suggesting all was well at the club.

But Hertha fans turned on their team during the woeful 5-0 defeat last week, and they displayed a banner in Düsseldorf asking, “Who’s taking who for a ride?”

And their worst fears were realized as Fortuna raced into an early lead – like Cologne did the previous weekend – with goals from Kenan Karaman and Erik Thommy in the first 10 minutes.

Hertha’s new signing, Krzysztof Piatek, missed a great chance to pull one back, and an even better opportunity in the 30th minute when he had only the goalkeeper to beat.

It got worse for the visitors when Karaman grabbed his second after more lacklustre Hertha defending in first-half injury time.

Hertha coach Alexander Nouri reacted as he had done against Cologne, also when it was 3-0 down at the break, by making two changes.

This time, however, it sparked a response, albeit with a bit of luck on Hertha’s side.

Vladimir Darida did well to send in a dangerous cross that was turned into his own net by Thommy in the 64th, and three minutes later Matheus Cunha made it 3-2 with a deflected shot.

Then Fortuna goalkeeper Florian Kastenmeier brought down Piatek and the Polish striker dusted himself off to equalize from the spot in the 75th. It was the former Milan striker’s first Bundesliga goal.

Both sides nearly scored in a frenetic finale. Düsseldorf substitute Nana Ampomah had a goal ruled out for offside in the 82nd.