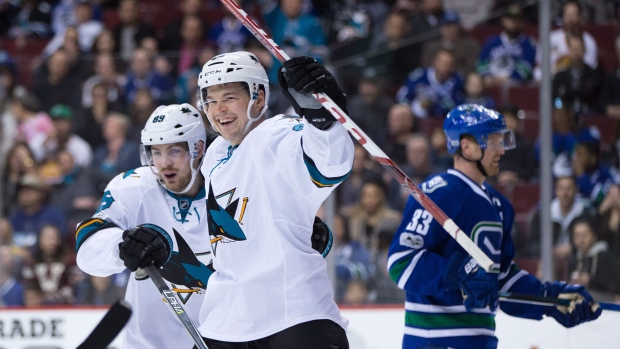 The San Jose Sharks have re-signed centre Tomas Hertl to a four-year contract, the club announced on Monday.

According to TSN Hockey Insider Pierre LeBrun, the deal carries an AAV of $5.625 million.

After struggling through an injury-riddled 2016-17 campaign, Hertl bounced back with a career-best 22 goals and 46 points last season. The 24-year-old added six goals and three assists in 10 postseason games.

"Tomas took a big step forward last season, both on and off the ice, and we feel that he is just starting to hit his prime," Sharks general manager Doug Wilson said in a statement. "He has the ability to be a dominant player in this League and proved during the playoffs that he can take over any given game with his combination of skill and strength. His capability to play both center and the wing gives our team some flexibility, and he has one of the most infectious personalities in our dressing room. We're excited he made this commitment to our organization."

Hertl’s coming off a two-year, $6 million contract signed prior to the 2016-17 season. Hertl was a restricted free agent.

A native of Prague, Czech Republic, Hertl has spent his entire career with the Sharks, after being drafted by San Jose in the first round (17th overall) of the 2012 NHL Draft.

Earlier on Monday, the Sharks announced the re-signing of Joe Thornton to a one-year deal.