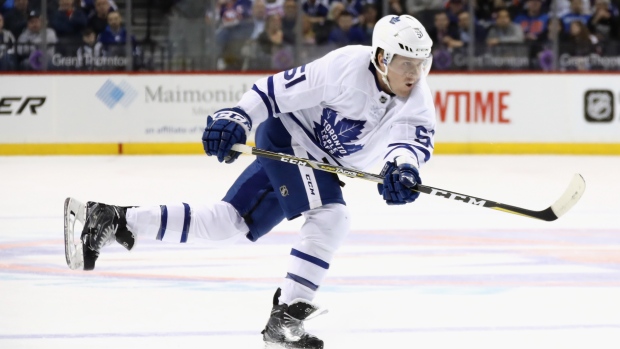 TSN Toronto reporter Kristen Shilton checks in daily with news and notes on the Maple Leafs. The team held a meeting and optional morning skate at Nationwide Arena on Friday.

Jake Gardiner is used to taking heat for his style of play, as comparably high-risk as it can be to the other Leafs' defencemen. But like the rest of Toronto’s blueline, under fire since before the season even started, Gardiner has worked his way into fine position through 37 games.

“I just looked today, happened to be scanning through it, and noticed [Gardiner's] like 19th in defensive scoring and he’s plus-17,” said coach Mike Babcock after the Leafs’ optional morning skate on Friday. “And he’s been on a power play that’s been kind of non-existent with the second group. So, Jake is a good player, he’s one of those guys who to me is an elite brain, makes tons of good plays all the time, is real smart, is way better than people think defensively and he’s an important player for us.”

Gardiner is one of three skaters the Leafs have among the NHL’s top-10 defencemen in plus-minus, along with Morgan Rielly (pacing all defenders at plus-26) and Ron Hainsey (plus-22). While that individual statistic is debated as a true measure of how good a player is, on the whole, Toronto has also given up the sixth-fewest goals in the NHL this season (at 2.78 per game).

That’s not to say general manager Kyle Dubas won’t upgrade the Leafs defence before the league’s Feb. 28 trade deadline, but for now, the blue line will stay the course with one another.

“I feel pretty good,” Gardiner said. “It’s pretty easy playing with Nikita [Zaitsev]. He’s so solid defensively and just takes time and space away from the other team. [It] makes it easy for me to get the puck and break it out.”

Breakouts have been an issue for Toronto all season to the point that Dubas mentioned earlier this month a lack of improvement there would expedite the process of a potential trade. Better communication will help the breakouts, though, and Gardiner has made strides in that category alongside Zaitsev.

“We’re very comfortable with each other,” Gardiner insisted. “That Russian barrier is tough sometimes, but he’s really opened up. You can see his personality more and more every day. He’s very sarcastic and he’s just fun to be around.”​

Travis Dermott could use some tips from Gardiner as he tries to build a similar bond with the Leafs' other Russian blueliner, Igor Ozhiganov. The two have been partners for most of the season, and even though Ozhiganov spoke less English than Zaitsev did when he arrived in Toronto, Dermott has made slow progress in growing their relationship.

“I think that we have a good level of comfortability with each other now; we’ve been working on that for this whole season so far,” Dermott said. “I think we’re at a good spot in the process of becoming fully comfortable, I think it is right there. I’m sure we’re just going to keep getting better game by game.”

Ozhiganov will slot back in with Dermott on Friday against Columbus after missing the Leafs last three games with an illness and, ideally, the partners will be able to establish a good rhythm at both ends of the ice.

“Even though we’re a third D-pair where we’re not supposed to be the ones making the offensive plays or really making a big impact in the offensive zone, I think we both like doing that,” Dermott said. “I think we’re just coming in trying to do the best with what we’re given - try to earn our ice time every night and try to limit our mistakes and make some good plays.”

It’s only been four days since the last time Toronto suited up for a game, capping off a back-to-back against the Detroit Red Wings on Dec. 23.

But enjoying the three-day Christmas break did come at a small price, with players showing more rust during Thursday’s practice than Babcock would have liked.

Meanwhile, the Blue Jackets got right to work, defeating the New York Rangers, 4-3, in overtime on Thursday. Whether that gives Columbus the edge against Toronto will be determined in short order.

“I guess we’ll see,” Dermott said. “Hockey is a weird game where you can think that and then it turns the other way. So whether it’s them having the comfortable feet from playing last night or maybe they’re tired or maybe we’re fresh, maybe we’re cold. You never know. You just try to prepare as best we can and have a good game.”

Friday will be the third and final meeting between the Blue Jackets and Leafs this season, with the sides spliting the season-series to date with 4-2 victories for the home team in each outing. All things considered, Gardiner was happy to have the team session on Thursday rather than just jumping right into game action.

“It’s not that long, but it feels like it kind of is sometimes,” he said of the layoff. “[We got to] handle the puck a little bit, had a pretty hard practice [yesterday] just trying to get back to it. Obviously [Columbus] having played last night, I wouldn’t say it’s an advantage because they’re going to be tired from the back-to-back, but they have their legs under them, so they’re back to game speed and we’ll have to warm-up extra hard and be ready to go.”

The last time the Leafs visited the Blue Jackets on Nov. 23, Josh Anderson scored twice in the first 10 minutes to put Toronto in a deficit they couldn’t quite overcome. Knowing how valuable the first half of the opening frame will be on Friday, Babcock hopes his squad is as mentally ready as they are physically to battle back.

“[Columbus] will have had their hands and their brain back,” Babcock explained. “That first 10 minutes when you’re back and you’re not used to executing at a high pace…we practiced yesterday and it was very evident we had a few days off from practice. You have to survive that first 10 and take care of the puck and get on them instead of them on you.”

Following the Blue Jackets’ win on Thursday, head coach John Tortorella was critical of his group, saying they had “work to do” despite coming away with a victory in six of their last seven games and five wins in a row.

Babcock can appreciate that drive to improve on a coaching level, but sees more than enough to like about this Columbus team.

“Any way you look at it, good teams find ways to win on a regular basis,” Babcock said. “They have a real good hockey club, real good depth, good goaltending. They’re going to be hard to play against. In saying all that, we have a good team too.”

“They have a really good goaltender [in Sergei Bobrovsky], mobile defencemen and obviously some firepower up front,” added Gardiner. “They’re just trailing us in the standings [by five points]. I’m sure this is going to be a meaningful game for both teams and just have to be ready to go.”

The question mark for Babcock is how much of the good Toronto will be able to bring right away. It’s a night where the Leafs' own depth, already impacted by the loss of Zach Hyman and Tyler Ennis to ankle injuries, could be in the spotlight and how efficient their secondary scorers and bottom defencemen are could ultimately tell the tale.

“You’d like to have your best stuff every day,” Babcock said. “But the more depth you have, the more people who can pick each other up and I think that’s what happens with good teams.”