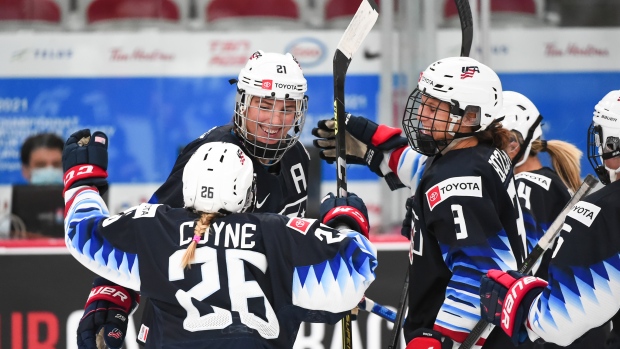 Knight passed former U.S. star Cammi Granato with a goal at 3:17 of the second period. The 32-year-old split two defenders with a cutback to find an open shooting lane for a 2-0 lead.

The goal also moved Knight into a tie with Granato for the U.S. record of 78 points at worlds, and Brianna Decker became the all-time U.S. assists leader (39) with the pass to Knight.

"It's really a magical moment, and a dream come true," Knight said. "I hope the next girl looking up is going to shatter that record, because that's what it's all about."

Lee Stecklein made it 3-0 late in the second period with a shot from the blue line, and the U.S. broke it open in the third with three goals in five minutes. Kelly Pannek ended a power-play drought for a 4-0 lead, Abbey Murphy scored her first goal to force a goalie change, and Jesse Compher capped the scoring.

The U.S. (3-0) has started the tournament with three straight shutouts for the third time (2001, 2009). The U.S. looks to extend a 29-game winning streak on Thursday in a Group A showdown against Canada, which played later Tuesday against Switzerland ahead of Hungary-Japan.