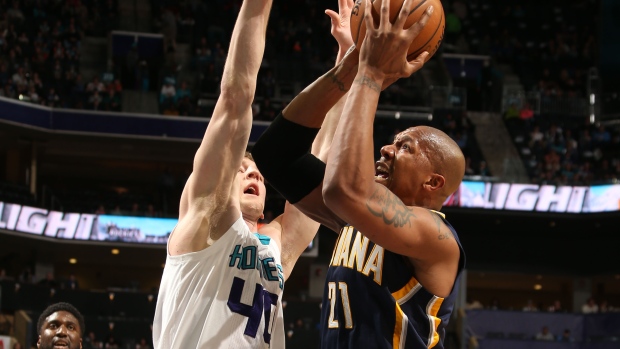 CHARLOTTE, N.C. -- George Hill was surprised when he was left wide open for the winning shot 3 feet from the basket.

He had no doubt he'd cash in.

Hill converted a short baseline floater with 4.9 seconds left over the late-arriving Cody Zeller to lift the Indiana Pacers to a come-from-behind 103-102 victory over the Charlotte Hornets on Sunday night.

"I played pretty bad all day," said Hill, who finished with 11 points. "I felt like I let my team down on both ends of the floor. But coach still trusted me and put the ball in my hands at the end of the game and said, 'Go make a play."'

C.J. Watson had 22 points and David West, Luis Scola and Rodney Stuckey each had 15 as the Pacers came back from 21 points down in the third quarter to get their third straight win.

After Marvin Williams knocked down a 3-pointer with 14 seconds left to put the Hornets up by one, Hill took a side inbounds pass and drove the right side of the line.

As he did, Brian Roberts gave way to Zeller on the switch. But when Hill drove under the basket to the other side, Zeller inexplicably left Hill momentarily and turned back to the lane. When Hill picked up his dribble and turned around he had a wide-open layup for the win over Zeller who unsuccessfully tried to block the shot.

"It was a miscommunication," Roberts said.

One that cost Charlotte a win.

But that wasn't the only mistake for the Hornets on a night when they gave up 64 points in the second half, including 36 in the pivotal third quarter.

Hornets coach Steve Clifford called the last 5 minutes of the third quarter the worst basketball his team has played all year.

"We (played) totally disorganized, random, awful basketball on both ends of the floor," Clifford said.

Clifford also took on the blame, calling it a poorly coached game.

After Hill's go-ahead shot, for instance, the Hornets were left without a timeout for the last shot attempt. Roberts took the inbounds pass, dribbled up the court and attempted a half-court heave that rimmed out.

"Not knowing what we we're doing on offence. ... that's on me," Clifford said.

Al Jefferson had 30 points and 13 rebounds, and Roberts added 19 points in the loss. Lance Stephenson was held to eight points on 2 of 7 shooting against his former team.

The Hornets led by 21 in the third quarter, but the Pacers rallied to take the lead at 89-88 on a jumper by Watson with 7 minutes left in the game. Scola was a difference maker in the second half, where he scored all of his 15 points on 6-for-9 shooting.

After a disappointing loss on the road at Philadelphia on Saturday night, the Hornets came out focused early on. They built 56-39 at halftime behind 53.8 per cent shooting and the strong play of Jefferson, who dominated Roy Hibbert in the low post.

It was an important win for Indiana as the All-Star break arrives.

"It's a big game against a team we're chasing," Pacers coach Frank Vogel said. "And a game we felt like we had to get."

Added Hill: "It's a big confidence boost for us. It's been a big struggle for us all season long."

Pacers: West has scored in double figures in eight straight games and in 31 games overall this season.

Hornets: Forward Michael Kidd-Gilchrist did not play and will be out through the All-Star break with a hamstring injury. Jeffery Taylor made his first start of the season in his place.

The Hornets remembered former North Carolina coach Dean Smith with a moment of silence before the game. Hornets owner Michael Jordan played for Smith for three seasons in Chapel Hill and helped the Tar Heels to a national championship in 1982.

The Hornets lost despite converting 8 of 14 3-point attempts.