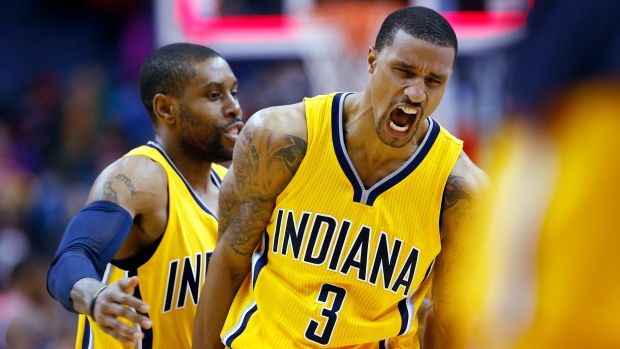 Hill's driving layup with 2.7 seconds left lifted the Pacers over the Washington Wizards 103-101, snapping Indiana's six-game skid. Hill scored 29 points, including 12 in the fourth quarter as Indiana (31-40) rallied from a 10-point deficit. At the end, he assumed the role often filled by the injured Paul George.

"Normally it's him in this position, but him not being there right now I've got to take the reins," Hill said, sitting next to George in the locker room.

Hill, who has averaged 22 points over the last seven games, started the final play at the top of the key guarded by Martell Webster, as John Wall had five fouls.

He drove to his right, got by Webster, and scooped the ball up off the glass and in before Nene could arrive for the block.

"Coming from San Antonio, I learned from a guy, Tony Parker, how to shoot right foot, right-hand scoop layups, floaters, going across your body," Hill said.

"We were supposed to trap the ball. We didn't," Washington coach Randy Wittman said of Hill's winning basket.

The Pacers' rally sent Washington (40-32) to its fourth-straight defeat.

"We blew that lead because of our gambling and giving no effort defensively," Wittman said. "We just quit playing defensively."

Wall, who scored 17 of his season-high 34 points in the final quarter, had tied the game with a 3-pointer from the top of the key with 11 seconds left.

"If we keep lapsing and doing these types of things, we will have an early exit from the playoffs," Walls said of the Wizards' late collapse.

C.J. Miles added 16 points for Indiana, which moved into a tie for eighth place in the conference.

Wall scored the Wizards' first eight points of the fourth quarter and his jumper at the 6:46 mark increased the Wizards lead to 90-80, but the Pacers chipped away.

They took their first lead of the quarter, 95-94, on Hill's driving layup with 2:28 left after a Wizards turnover.

He hit two free throws with 1:42 left, but after misses from each team, David West's floater put Indiana up 99-96 with just under a minute left.

The teams then traded a pair of free throws.

In addition to George, Indiana was also minus second-leading scorer Rodney Stuckey (averaging 12.9 points), who missed his second game with a sore left calf.

Wall scored 10 points in the third quarter and the Wizards led 76-70 to start the fourth.

Pacers: Trail season series 2-1, with the fourth and final game April 14 at Indiana. ... Roy Hibbert is 1-17 from the field in the three games against the Wizards. ... Improved to 4-12 in games in games decided by three points or less.

Wizards: C-F DeJuan Blair (personal reasons) and Toure' Murry (sprained left ankle) were out. ... The team continues to be minus F Kris Humphries (strained left groin) and G Garrett Temple (right hamstring strain). ... Soccer star Lionel Messi and Argentina's national team were in attendance. The team is in Washington for a friendly versus El Salvador Saturday.

NOT FILLING THE VOID

With the win, the Pacers inched back into a tie for the final playoff spot in the Eastern Conference with Boston. However, the Celtics own the tiebreaker because of a 2-1 head-to-head edge. "We're in survival mode right now and every game matters," coach Frank Vogel said. "This is a group that's been deep in the playoffs and I like our chances."