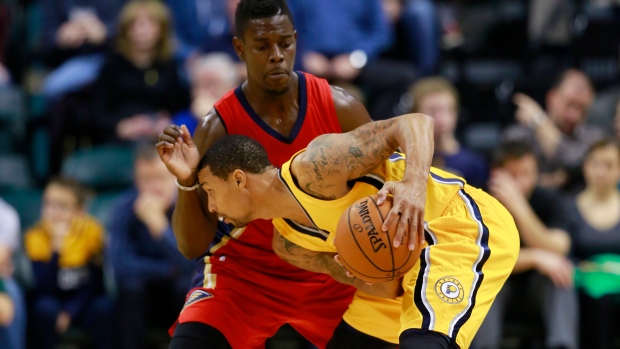 But no one runs the Indiana offence quite like the Hill. And on Tuesday night, Hill provided an immeasurable impact for the Pacers in his season debut.

After missing the first 28 games with a left knee contusion, Hill had a team-high 15 points, four rebounds and three assists in 21 minutes to lead the Pacers to a 96-84 win over the New Orleans Pelicans.

The Pacers finally have their floor general back. And he's still that humble Indianapolis native.

"I did not try to put any pressure on (myself) like that," Hill said. "Just make a play when you need to make a play. I didn't worry about how many points I scored or how many rebounds or assists. I just tried to focus on playing each play hard and trying to win the game."

On a night when the Pacers offence flowed as well as it has at any point this season, Hill's ability to control the game's flow — and his teammates' production — made all the difference.

Indiana (10-19) finished with six players scoring in double figures thanks in large part to Hill's ability to get everyone involved in the offence. All night, the Pacers were willing to make the extra pass to get a better shot. And their passes seemed crisper Tuesday. Things just seemed easier on offence with Hill guiding the way against New Orleans (14-14).

"George coming back makes a big difference," Miles said. "He runs the offence and he gets guys where they need to be and putting them to their strengths."

David West and Solomon Hill each finished with 13 points. Roy Hibbert scored 14 points and tied a season-high with seven blocks. CJ Miles added 11 points and six rebounds off the bench for the Pacers. C.J. Watson, who started at point guard for Indiana on Tuesday, scored 10 points.

While the end result was Hill providing a much-needed boost, he did have to knock off some rust. His first two passes were bobbled by teammates and he finished the game with two turnovers.

Early in the fourth quarter, Hill awkwardly finished a 2-on-1 breakaway with Miles after bobbling what would have been an attempt at a lob to Miles toward the rim. Hill kept the ball within his reach despite losing control and cautiously guided the ball onto the backboard for a layup.

"He looked great out there," Vogel said. "He made a lot of heady offensive plays. He just played a great basketball game at both ends."

Indiana kept Anthony Davis in check for much of the game. Averaging 24.7 points per game Davis finished with 21 points and nine rebounds, but struggled on the defence.

Davis said he wasn't surprised by his own struggles, considering the Pacers have the NBA's third-best scoring defence.

"We knew coming in they were a physical team and that they were going to push us around," Davis said. "We have to learn how to be more physical, and be consistent after a good win."

Tyreke Evans finished with 14 points and 11 rebounds - all of which were on the defensive end. Jrue Holiday added 16 points, five rebounds and five assists for the Pelicans.

After losing eight straight games, the Pacers are 3-2 in their last five games and won have won back-to-back games for the first time in more than a month.

PACERS: Point guard George Hill made his season debut against New Orleans after missing the first 28 games of the season with a left knee contusion.

Indiana plays at Detroit on Friday.