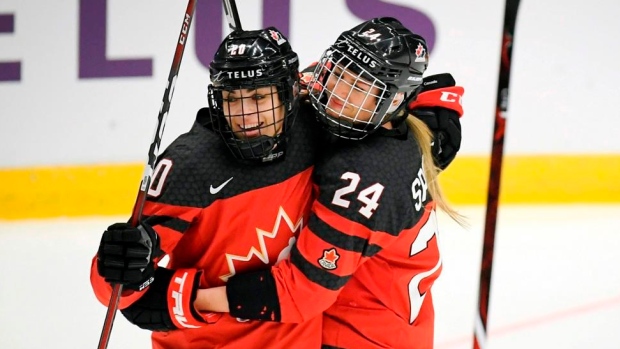 Hockey Canada announced Thursday the 25 players who will represent Canada at the upcoming 2021 IIHF Women’s World Championship from Aug. 20-31 at WinSport Arena at Canada Olympic Park in Calgary.

2⃣5⃣ players will wear the 🍁 and represent Canada at the 2021 IIHF Women’s World Championship in Calgary.

The team was chosen by head coach Troy Ryan, alongside director of hockey operations Gina Kingsbury, management consultant Cassie Campbell-Pascall and the rest of the coaching staff from the 29 players chosen to centralize with Canada for the 2021-22 season leading up to the Olympics in Beijing.

All of those 29 players will resume training for Olympics after the conclusion of the world championship.

“It has been a challenging 16 months for our athletes and staff, but we have never lost sight of our goal of competing for a world championship on home ice,” said Kingsbury. “We have had few opportunities to train together as a group, but our training camp has been high tempo and competitive. We are confident in our group; we are a team full of skill, youth and veteran leadership that will give us the best chance to compete for a gold medal beginning Aug. 20.”