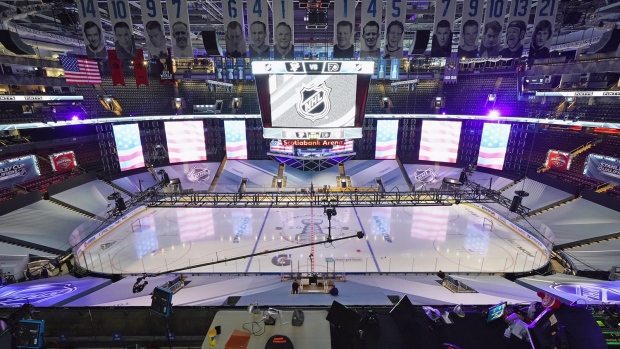 The hulking, bruising Vegas Golden Knights winger — one of the NHL's biggest personalities — had watched NBA players refuse to participate in three playoff games in the aftermath of the police shooting of Jacob Blake, a Black man, in Wisconsin over the weekend.

Hockey, however, plowed ahead with its full slate. That bothered Reaves.

"Last night I struggled with what I wanted to do," said the 33-year-old Winnipeg native, who is Black. "Whether it was, 'Am I really going to walk out on my team and be the only guy or is there going to be a couple guys?' But I woke up to a text from (Tampa Bay Lightning defenceman) Kevin Shattenkirk and he had a bunch of guys out east there and they wanted to talk. Then I got a text saying (players from the Vancouver Canucks) wanted to talk. That, I think, was more powerful. The conversation started with white players on other teams wanting to talk.

"That's the most powerful thing that happened."

The NHL and the NHL Players' Association announced Thursday — at the request of the players — it was postponing two playoff games scheduled for that evening and the two set for Friday in the aftermath of Blake's shooting, and in response to the wider issues surrounding systemic racism, social justice and police brutality.

"We had a chance to talk as a team last night and this morning," Shattenkirk said via video conference from Toronto. "We all got together as players to try to figure out what sort of direction we were going to be going in.

"It was something that we were all fully behind. With what transpired (with) the other leagues sitting out, we took our time and we were able to process this as a whole and speak as a group of players and make the right decision."

The New York Islanders and Philadelphia Flyers were scheduled to play in Toronto on Thursday, while Vancouver and Vegas were slated to square off in Edmonton. Tampa Bay versus the Boston Bruins is off Friday's docket in Toronto, while the matchup between the Colorado Avalanche and Dallas Stars in Edmonton was also scratched.

Play is set resume Saturday inside the NHL bubbles in both cities.

"There's a lot of white athletes in here," Reaves said from Edmonton with members all four Western Conference teams remaining in the leagues's restart to its pandemic-delayed season standing in the room. "That's the statement that's being made right now. It's great that the NBA did this, and MLB and the WNBA — they have a lot of black players in those leagues. But for all these athletes in here to take a stand and say, 'You know what? We see the problem, too, and we stand behind you.' I go to war with these guys. I hate their guts on the ice, but I couldn't be more proud.

"The statement they've made today is something that's gonna last."

Canucks captain Bo Horvat said it was important to reach out to Reaves and take a stand.

"It was the right decision," he said. "We needed to do something."

Colorado Avalanche centre Nazem Kadri, who is Lebanese-Canadian, said this generation of NHL players has a chance to make their voices heard in a sport that's been historically white, conformist and slow to adapt.

"We have a unique opportunity to try to create sustainable change," he said. "That's what this is all about. It's not just one or two guys. It's every single player being on the same page and sticking together.

"Morally and ethically this is the right thing to do."

Colorado Avalanche centre Pierre-Edouard Bellemare, who is Black, said it was strange to play Wednesday knowing other leagues were standing down.

"It didn't feel right," he said. "After reflecting on it and us being here together, it's the best response we could have."

"I don't think anything feels right, right now, to be honest," Lighting head coach John Cooper said Thursday morning when asked about going ahead with his team's game the previous night. "There's so much education that needs to go on."

A number of NHLers made strong statements — some even marched with protesters — in the spring after George Floyd, another Black man, died when a white Minneapolis police officer kneeled on his neck for nearly nine minutes.

The league unveiled its #WeSkateFor campaign when it resumed the season, with #WeSkateForBlackLives and #WeSkateForEquality banners featured in Toronto and Edmonton, while the slogans "Black Lives Matter" and "End Racism" have been displayed on screens throughout the arenas.

Minnesota Wild defenceman Matt Dumba, who is Filipino-Canadian, delivered an impassioned speech on the first day of the restart in street clothes before taking a knee during "The Star-Spangled Banner." He subsequently raised a first during both the American and Canadian anthems until his team was eliminated.

Reaves was then joined by teammate Robin Lehner, and Tyler Seguin and Jason Dickinson of the Stars — the latter three are white — as the first players to kneel for the anthems in uniform before an NHL game.

"He doesn't do anything without considering everything," Vegas head coach Pete DeBoer said of Reaves. "When we discussed what was going to go on here he had my full support. I don't think he slept a lot last night. It weighed heavily on him.

"I'm real proud of him and proud to stand behind him."

The NHL and NHLPA said Thursday both understand "much work remains to be done before we can play an appropriate role in a discussion centred on diversity, inclusion and social justice."

"We understand that the tragedies involving Jacob Blake, George Floyd, Breonna Taylor and others require us to recognize this moment," the statement read. "We pledge to work to use our sport to influence positive change."

Members of the Hockey Diversity Alliance — a group including Kadri, Dumba and Evander Kane formed earlier this year that hopes "eradicate racism and intolerance in hockey" — tweeted out messages Thursday asking the league to suspend play.

The organization also released a statement calling on the NHL to commit to grassroots programs for minorities, funding for impactful social justice iniatives, anti-racism education, targets for promoting Black individuals and businesses, and rule changes to make the culture of the game more inclusive.

"It's very reasonable," Kadri said. "We want the NHL to understand that this is a partnership, a collaborative effort to create sustainable change. It's gonna have to be the whole league, it's gonna have to be collectively. Not just one or two guys. Strength in the numbers is key.

Less than 24 hours prior to the postponements, however, the league appeared stuck in the mud as the world around it was changing quickly. Some television broadcasters said live on air they felt uneasy with the games going ahead, while players from the Lightning, Bruins, Avalanche and Stars had to answer questions about why they decided to play.

A brief, so-called "moment of reflection" was held before the Lightning and Bruins battled in Game 3 of their series Wednesday. There was no such moment before Stars-Avalanche in Edmonton.

And that's what matters to Reaves.

"Two days isn't gonna fix anything," he said. "But the conversation and the statement that's been made is very powerful.

"Especially coming from this league."