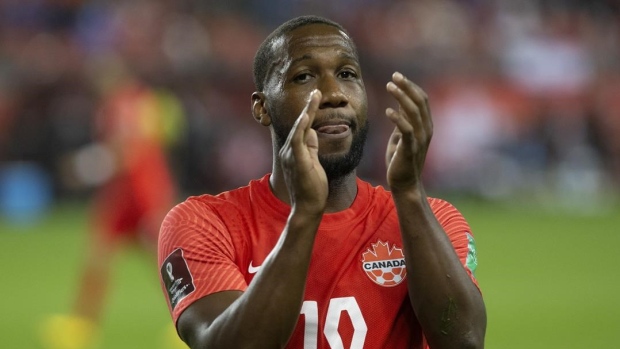 Canada will be without forward Junior Hoilett and midfielder David Wotherspoon for Thursday's CONCACAF World Cup qualifying game in Mexico.

The two British-based players — Hoilett is with England's Reading while Wotherspoon plays for Scotland's St. Johnstone — will instead join Canada in Jamaica for Sunday's match against the Reggae Boyz.

Canada Soccer says the two are skipping the Mexico game because of the quarantine requirements following a visit to the country by British residents.

There is also a question-mark over the availability of veteran goalkeeper Milan Borjan, who is recovering from COVID, according to his Red Star Belgrade club. Maxime Crepeau of the Vancouver Whitecaps and James Pantemis of CF Montreal are the other 'keepers on the Canadian roster.

The 51st-ranked Canadian men play No. 9 Mexico at Mexico's City's historic Azteca Stadium on Thursday before heading to Kingston to play No. 59 Jamaica on Sunday. Canada then returns home to host No. 68 Panama on Wednesday at Toronto's BMO Field.

Mexico (2-0-1) currently leads the eight-team final round of CONCACAF qualifying. Canada (1-0-2) is second on goal difference, tied on points with the U.S. and Panama.

Jamaica is last in the so-called Octagonal at 0-2-1.

Come March, the top three teams will qualify for Qatar 2022 with the fourth-place team taking part in an intercontinental playoff to see who joins them from the region covering North and Central America and the Caribbean.

This report by The Canadian Press was first published Oct., 5, 2021.