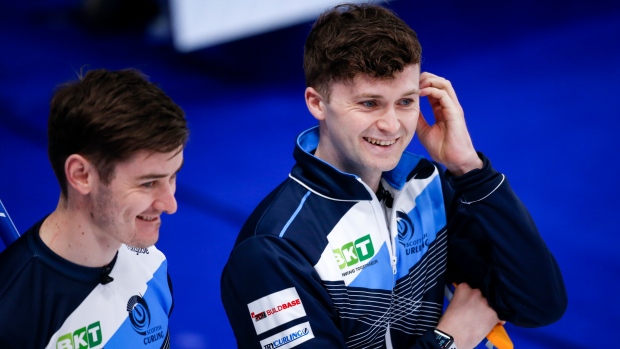 The early Canadian curling season continued this weekend with the Stu Sells Oakville Tankard, the third straight bonspiel to take place in the city.

This time it was 2018 Ontario champion Hollie Duncan and her Woodstock rink of Megan Balsdon, Rachelle Strybosch and Tess Bobbie taking the title after wins over Jennifer Jones in the semifinals and Kerry Galusha in the final.

Thanks for your (always) amazing ice and hospitality @OakvilleCurling! And thanks to @Stusellsto for putting on a great event! https://t.co/3x5KGAtt9E

In Sunday's championship tilt, Duncan put up a four-spot in the second end and proceeded to pick up three points with steals in the next two ends for the eventual 7-3 win.

At last weekend's Oakville Labour Day Classic, Team Duncan made it to the semis where they dropped a 7-6 decision to Team Tracy Fleury.

On the men's side of the draw, Scotland's Bruce Mouat continued his winning ways in Canada.

The 27-year-old hasn't missed a beat so far this season, winning the Stu Sells Oakville Tankard with a 5-3 victory over Sault Ste. Marie's Brad Jacobs in Monday's final.

A really tight game this afternoon vs Team Jacobs. We dodged a bullet in 7 and managed to come out of this battle with the W✅ Thanks to Stu And his team and @OakvilleCurling pic.twitter.com/edrywZhN1c

Team Mouat went 6-0 over the four-day event, including victories over Brier regulars Jason Gunnlaugson of Manitoba in the quarters and Saskatchewan's Matt Dunstone in the semis.

Glenn Howard's team continued their strong play in Oakville over the past three weeks, making it to at least the semifinal round once again before falling to Jacobs, 6-1.

Other notable names included Mike McEwen and John Epping, who both were ousted in the quarters. Colton Flasch missed the playoff round with a 3-3 record.

South Korea's Team EunJung Kim took out some big names on the way to their victory at the Saville Shoot-Out on the Alberta Curling Series.

The 30-year-old skip, who won silver for South Korea at the 2018 Olympics, defeated two-time Canadian champion Kerri Einarson in the quarters, 8-7, before dispatching Casey Scheidegger in the semis, 5-4.

Team Kim faced off with the 2021 Scotties Tournament of Hearts bronze medallists, led by Laura Walker, winning 6-1 after just six ends. Kim's crew didn't lose a game at the Saville Shoot-Out and finished 7-0.

Kim was joined by Kyeongae Kim at third, Chohi Kim at second and Seonyeong Kim at lead.

Playing in their first bonspiel of the year, Team Rachel Homan qualified for the playoffs, but lost to Scheidegger in the quarterfinals.

Chelsea Carey, Mackenzie Zacharias and Sherry Anderson all missed the playoffs in the stacked 25-team field.

At the Curve US Open of Curling, Tabitha Peterson won the women's title with Luc Violette doing the same on the men's side of the draw.