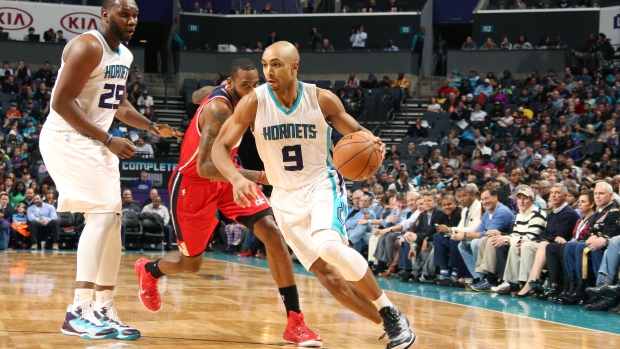 CHARLOTTE, N.C. - Hornets coach Steve Clifford walked into the locker room at halftime and bawled out his players, telling them they had played the first 24 minutes without purpose, particularly on defence.

That changed in the second half.

Henderson scored 27 points and the Hornets stepped up their defence after the break to beat the Washington Wizards for the second time this week, 94-87 on Thursday night.

The Hornets gave up just 33 points after the break. They allowed 54 in the first half.

"We weren't in our spots," Henderson said of the first half. "We weren't helping each other and we didn't have any energy. So, in the second half we came out with more than that."

Said Hornets guard Lance Stephenson: "It shows who is playing harder and who wanted it more — and we showed that tonight."

Henderson was 10 of 15 from the field as the Hornets beat the Wizards for the fifth straight time. Charlotte won at Washington on Monday night, 92-88.

Brian Roberts had 12 points and provided a huge spark late in the third quarter after Charlotte fell behind by 11. Stephenson, Michael Kidd-Gilchrist and Jason Maxiell added 11 points apiece for the Hornets (22-27).

Washington has lost five straight games, leaving coach Randy Wittman frustrated over his team's dual personality when it comes to the second half.

"Take my quotes from the last four games — it's a broken record," Wittman said. "Until we understand it, it's going to be like that. The same exact thing over and over again."

Wittman was disappointed by his team's selfish play after the break and refusal to move the ball and find open shots.

"For whatever reason, we take it upon ourselves to say, 'This is a time for me,'" Wittman said.

Paul Pierce scored 19 for the Wizards. John Wall had 15 points and 13 assists.

Wizards guard Bradley Beal left in the first half after re-aggravating his right big toe and did not return. He had one point in 11 minutes and watched the game from the locker room in the second half.

"We've got to get back to having fun and I think we have lost sight of that," Beal said. "We are too tight and we just need to be natural and play freely."

Charlotte came into the game allowing the fewest points per game in the NBA since Jan. 1, and its defence proved to be the difference. The Hornets held the Wizards to 5-of-19 shooting in the fourth quarter.

With the Hornets down 11 late in the third, Roberts hit a 3-pointer and a leaner off the glass to beat the buzzer and pull Charlotte within five. Stephenson tied it at 76 with 9:07 left on a drive down the lane.

Al Jefferson, who had been quiet all game, then got into the flow, throwing down a rare putback slam — only his seventh dunk of the season — and scoring on an up-and-under move to give the Hornets the lead for good.

Charlotte went 9 of 9 from the foul line in the fourth quarter.

"The big adjustment was we tried harder in the second half, to be honest," Clifford said.

Jefferson, who had 18 points and 12 rebounds Monday against the Wizards, was a non-factor most of the game thanks to Marcin Gortat's physical defence in the low post. But he was big in the fourth quarter, finishing the game with eight points and 10 rebounds.

Wizards: Kevin Seraphin was a late scratch with a sprained ankle.

Hornets: Panthers linebacker Thomas Davis was introduced during the game and received a standing ovation for being chosen the NFL's Walter Payton Man of the Year.

Maxiell had a career-high seven blocked shots. His big body and strength gave the Hornets a needed physical presence down low. Not known for his scoring, his 11 hustle points gave Charlotte a needed lift when Jefferson was struggling. But Maxiell knows his strength is defence.

"You know an old guy like myself, it's not about how high you jump, it's about stopping the ball at the rim," Maxiell said.

Hornets: At Philadelphia on Saturday night.