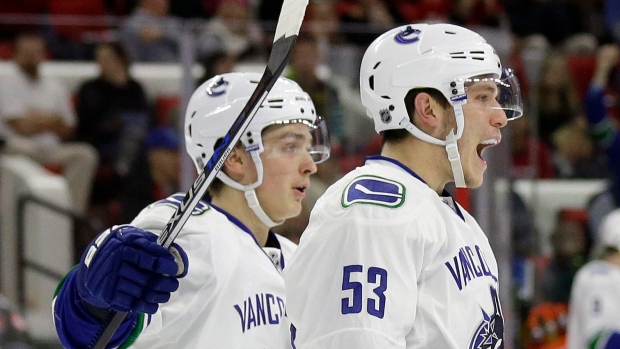 RALEIGH, N.C. - Vancouver Canucks centre Bo Horvat has used a simple formula to dominate the Carolina Hurricanes over the past 10 days.

Horvat got his second goal with 1:35 left in overtime, giving him four goals in two games against the Hurricanes this month, and the Canucks won 3-2 on Friday night.

"I guess it's just shooting the puck," Horvat said. "I don't know what's going on scoring-wise, but it definitely feels nice to put the puck in the net.

Horvat also keyed a 3-2 win over Carolina nine days earlier and has half of his eight goals this season against the Eastern Conference foe. The 20-year-old was the ninth overall pick in the 2013 draft and has produced mixed results this season, getting 19 points but also posting a team-worst rating of minus-20. He was plus-2 on Friday.

"My dad and I were talking about the plus-minus yesterday," Horvat said. "It obviously bothers me. My biggest pet peeve is getting scored on. I'm lucky to get a couple of pluses here tonight."

Horvat won it when he one-timed a shot from near the top of the right circle during a delayed penalty call. It was his sixth goal in his last six games.

"Bo has started taking a lot of faceoffs and doing extra things and he has seemed to flourish," Vancouver coach Willie Desjardins said. "When he got more given to him, he seemed to find his game. He has been good the last six games, not only offensively but defensively.

Linden Vey got his first goal of the season and Jacob Markstrom made 38 saves for the Canucks.

Carolina's John-Michael Liles made it 2-2 with 2:10 left in the third period. Kris Versteeg also scored for the Hurricanes, and Cam Ward made 19 saves.

"I'm glad we got the point," Hurricanes coach Bill Peters said. "I'm glad we stuck with it and were resilient. We had really good looks in the last 40 minutes and we had some skilled players with the puck in some good spots. We were able to find a way to get a point on a night when we didn't play a complete game."

Vey beat Ward stick side from the left circle on an unassisted rush with 6:46 left in the first.

Versteeg tied it on a power play with 1:33 left in the first, blasting the puck past Markstrom glove side from the right circle with Jaccob Slavin assisting.

Carolina outshot the Canucks 19-5 in the second period.

"We spent a little bit more time in our zone than we wanted, and we kept with it," Markstrom said. "On the road it doesn't have to be pretty. It was just one of those nights, and it's the end result that counts."

Horvat put the Canucks ahead again at 9:32 of the second by ripping the puck over Ward's left shoulder. Taylor Fedun got the assist in his first NHL game this season.

Liles tied it on a tough-angle goal from the left side, with Andrej Nestasil on the assist.

Friday marked the first game back for Hurricanes left wing Nathan Gerbe after spending 25 games on injured reserve with an ankle injury.

NOTES: It was the 800th NHL game for Hurricanes defenceman Ron Hainsey. ... Carolina was not assessed a penalty in the game. Vancouver was sent to the box twice. ... Carolina D Brett Pesce (lower body) was out, while LW Chris Terry was a healthy scratch. ... Vancouver RW Derek Dorsett missed the game with illness and D Yannick Weber was a healthy scratch. ... Vancouver RW Radim Vrbata was a member of the Hurricanes from late in the 2002-03 season to early in the 2005-06 campaign. ... The Hurricanes visit Pittsburgh for the opener of a two-game trip on Sunday. ... Vancouver visits the New York Islanders on Sunday in the third game of its six-game East Coast trip.