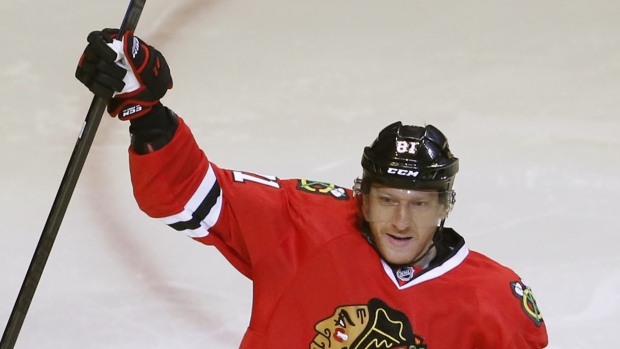 CHICAGO - Marian Hossa is smiling again. The swagger is back. While the Chicago Blackhawks are searching for successful line combinations, Hossa is rolling.

The veteran winger scored his seventh goal in four games, and the Blackhawks rallied for a 3-1 victory over the New Jersey Devils on Friday night.

"When you've got more confidence, the puck is with you," Hossa said. "You try to do a little more. At the same time, you try to keep things simple, and just put a puck at the net."

Hossa also had an assist on Jonathan Toews' tiebreaking goal in the third as the Blackhawks rebounded from a pair of losses at the start of an eight-game homestand. Kris Versteeg tacked on an empty-net score, and Corey Crawford made 25 saves.

Peter Harrold scored in the first for New Jersey, which has dropped three in a row. Cory Schneider had 32 stops.

Chicago got off to another slow start and looked all out of sorts before Hossa took over. The Blackhawks also struggled for much of Wednesday night's game against Vancouver, but Hossa scored two of Chicago's three goals in the third period as the Blackhawks put together a big rally to salvage a point in a 5-4 overtime loss to the Canucks.

It was more of the same for Hossa in the third against New Jersey. With Michael Ryder in the penalty box for interference, the 36-year-old Hossa beat Schneider with a well-placed shot into the right side for the tying score just 1:27 into the period.

"It came so softly that it just literally fell as I went to go get it," Schneider said. "It's a tough one for me. I would have loved to have had that one. It was a bit of a funky goal and the way I felt, the way I was playing, it was one I felt I should have and could have had."

It was Hossa's 17th goal for the season. Before his current tear, he had two goals in his previous 15 games.

"On fire," Blackhawks coach Joel Quenneville said. "He's got it going. He's got that touch."

Hossa then got loose for a rush to the net that was turned away by Schneider, but Toews was there to push in the rebound at 4:10. It was Toews' first goal since Jan. 30 at Anaheim, stopping a six-game drought.

New Jersey had a chance to tie it again when Patrick Sharp was sent off for hooking, but Chicago killed off the ensuing power play. The Devils were unsuccessful on their two chances with the man advantage.

"We didn't capitalize when we had a power play and unfortunately gave up a power-play goal at the beginning of a period and gave up a second goal," Devils general manager and co-coach Lou Lamoriello said.

New Jersey got its only goal from an unlikely source in the first period.

Scott Gomez was skating behind the net when he made a nice pass in front to Harrold, who watched his one-timer go off Crawford's left pad and then the post for his second goal of the season. It was the defenceman's fourth goal in four seasons with the Devils and No. 12 for his nine-year NHL career.

While Chicago forward Ryan Hartman provided a spark in his first NHL game, a pair of veteran New Jersey forwards each reached a career milestone.

Patrik Elias played in his 1,200th game, all with New Jersey, becoming the 103rd player to reach the total. It was game No. 1,524 for Jaromir Jagr, moving him into a tie with Brendan Shanahan for 13th on the NHL list.

Hartman was selected by Chicago in the first round of the 2013 draft and was promoted to the Blackhawks on Thursday. Hartman, a local product who grew up rooting for the Blackhawks, had a huge hit on Dainius Zubrus on his first shift.

"I think after that the nerves were pretty shot. They were gone," Hartman said. "I'm just glad we got a team win."

NOTES: Blackhawks RW Ben Smith was a healthy scratch for the first time this season. He has just one assist in his last 22 games. ... D Eric Gelinas and Ryder returned to the lineup for New Jersey, which scratched D Mark Fraser and F Martin Havlat. It was Ryder's first game since Jan. 19 at San Jose, and Gelinas had missed the previous six games. ... Chicago also scratched Ds Michal Rozsival (upper body) and Tim Erixon (lower body). Rozsival and Erixon are day to day.