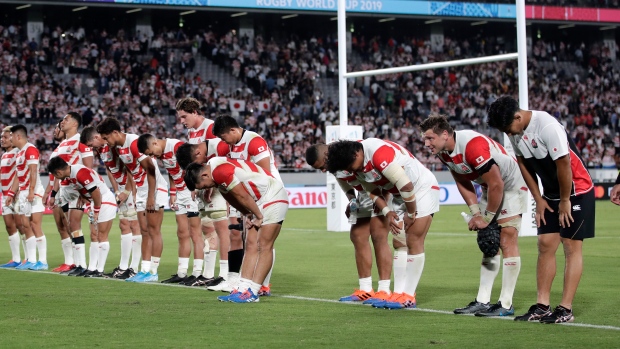 The Tokyo Stadium crowd was stunned after four minutes as fullback William Tupou missed a routine catch under no pressure to allow left winger Kirill Golosnitsky an easy converted try. Another first: The quickest opening-match try in tournament history.

Pockets of Russian fans — including a handful dressed as Soviet-era astronauts — were louder than the home crowd watching in silent anxiety as the home nation dropped high balls or fumbled them.

It could have been even worse but this was not New Zealand attacking them. After Japan again carelessly gave the ball away, center Vladimir Ostroushko burst through midfield but kicked ahead aimlessly instead of waiting for support.

Matsushima thought he had a second try five minutes from halftime, but fullback Vasily Artemyev made a brilliant captain’s tackle and video review showed Matsushima spilling the ball inches above the ground. Referee Nigel Owens ruled it out, drawing jeers.

Moments from the interval, Matsushima made it count as Japan finally established a period of sustained pressure and center Ryoto Nakamura fed him an overlap pass for an easy converted score.

After Tamura’s penalty settled nerves in the second half, the anxiety lifted when flanker Pieter Labuschagne stripped Andrei Ostrikov before scampering 40 meters over for an unconverted try.

Russia battled away, still, and flyhalf Yuri Kushnarev’s penalty cut the deficit with 20 minutes left after Japan infringed at the ruck.

Matsushima finished Russian resistance off, breaking a weak tackle as he overlapped again down the right.