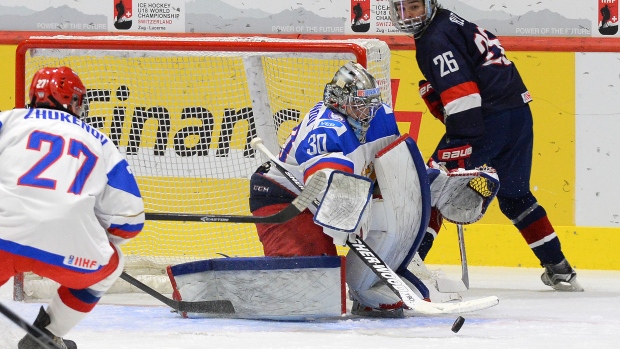 Each day throughout the World Junior Hockey Championship, TSN Director of Scouting Craig Button brings important issues and topics surrounding the tournament to the forefront.

HBI1: We knew the Finns could fill the net, but they proved Monday that they’re more than capable of winning low-scoring games — even if the mighty LAP Line is kept off the scoresheet. While the trio of Patrik Laine-Sebastian Aho-Jesse Puljujarvi generated only four shots – one fewer than the minimum number of points they earned in every preceding game - it was goalie Kaapo Kahkonen who keyed the win over Sweden, turning aside 21 of 22 shots. It was a second solid showing for Kahkonen, who came off the bench in the quarterfinal against Canada and stopped 22 of 24 shots. Coach Jukka Jalonen warned the Finns couldn’t rely on the LAP Line every game and he got secondary scoring from Roope Hintz and Antti Kalapudas. Wide open or tight-checking, the Finns look intent on capturing gold on home ice in Helsinki.

HBI2: Another No. 2 goalie stepped up to steal the show in the second semi-final. Washington Capitals’ prospect Ilya Samsonov, in just his second start of the tournament, stopped 26 of the 27 shots he faced in Russia’s 2-1 victory over the USA. Christian Dvorak had the lone goal for the Americans, while tournament-long threats Auston Matthews, Matthew Tkachuk and Colin White were held in check by a Russian squad committed to team defence and blocking shots. A three-minute burst of offence in the second period – where Pavel Kraskovsky and Yegor Korshkov managed to beat an otherwise stellar Alex Nedeljkovic in the U.S. goal – was all the support Samsonov needed to ensure the Russians kept their perfect World Juniors medal-round record against the Americans intact. It also sets up a likely battle of the backups in the final between Samsonov and Finland’s Kahkonen.