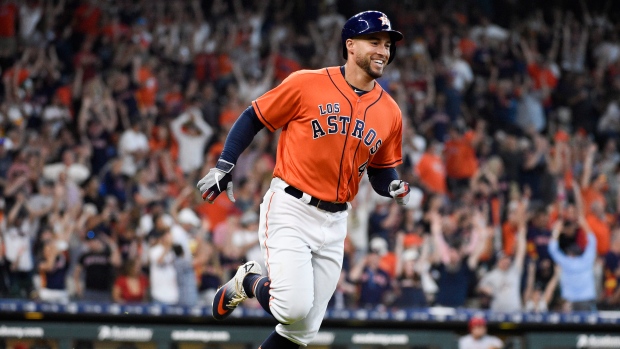 HOUSTON — George Springer has hit a career-high three homers for the Houston Astros, all of them in the first four innings against the Los Angeles Angels on Sunday.

The MLB record of four home runs in a game has been done 18 times. J.D. Martinez did it most recently for Arizona on Sept. 4, 2017.

In his first chance at tying the mark, Springer popped up with the bases loaded in the fifth. He then grounded out in the seventh.

Springer got to work immediately, sending Jose Rodriguez's first pitch into left-centre field for his franchise-record 12th leadoff homer this season. That left the 2017 World Series MVP one shy of the MLB record for leadoff homers in a season set by Alfonso Soriano with the Yankees in 2003.

The game was tied in the second when Springer connected off Rodriguez again, this time for a two-run shot that put the Astros up 3-1.

There were two outs in the fourth when Springer sent a fastball from José Suárez into the seats in left field to make it 4-2.

It is the 14th time in a regular season game in franchise history that an Astros player has hit three homers and the second time this season after rookie Yordan Alvarez also did it.

A win would clinch the AL West for the Astros.