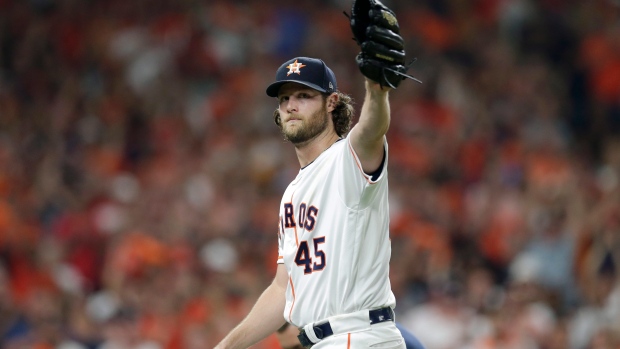 HOUSTON — All those regular season wins for Gerrit Cole and the Houston Astros have manager AJ Hinch feeling just fine entering a winner-take-all game with the Tampa Bay Rays on Thursday night.

"They've got to come into our house and beat us again," Hinch said. "With Cole on the mound, I don't know who could be more confident than us."

Cole will start for the Astros in the decisive Game 5 of their AL Division Series. The right-hander hasn't lost since May 22, winning a franchise-record 17 straight decisions, capped by a 15-strikeout gem in the Astros' Game 2 victory. He'll try to punch Houston a ticket to its third straight AL Championship Series, and he'll do it at home because the team won a franchise-record 107 games to earn home-field advantage throughout the post-season.

"I love that we're here," Hinch said. "The way we got here is nerve-wracking just because you don't want to get to a Game 5 (but) we fought all year for have a better record and to win our division to get this particular game at home."

The Astros got splendid pitching performances from Justin Verlander and Cole to take a 2-0 lead in the series. Then the Rays jumped on trade-deadline acquisition Zack Greinke for six runs in 3 2/3 innings of a 10-3 win in Game 3 before Verlander came back on short rest and took the loss in Tampa Bay's 4-1 victory which evened the series. Thursday's winner will face the AL East-champion New York Yankees.

Houston went 60-21 at Minute Maid Park in the regular season, but the upstart Rays have shown fearlessness in downing the Athletics in the wild-card game before fending off elimination with their last two wins. In the playoffs for the first time since 2013 and the underdogs in this series against the star-studded Astros, the Rays have played bigger than the names on the backs of their jerseys.

"I do think the mentality that these guys come to the ballpark (with is), they might not be superstars, but they certainly believe they are," Rays manager Kevin Cash said.

They used a parade of relievers Tuesday night but will return to a traditional starter in Game 5 with Tyler Glasnow.

Glasnow sat out from May 11-Sept. 8 with a right forearm strain and threw 76 pitches in 4 1/3 innings in a Game 1 start. Cash said he expects Glasnow to be at full strength Thursday and hopes he'll be able to throw around 90 pitches, but that could change.

"You go in with a game plan, a thought process, but you gauge off how the ball is coming out and how they're feeling," he said.

Cash added that all of his pitchers will be available for Game 5, including reigning AL Cy Young Award winner Blake Snell, who closed Game 4 in his first career relief appearance, and Charlie Morton, who started Monday.

Snell was irked at everyone who wrote off the Rays after they fell into the early hole in the series.

"I don't know about everyone else, but I got annoyed of hearing about Houston this, Houston that," Snell said. "I know how good they are. I know how talented that team is. But I felt like everything media driven was strictly about them, and they weren't giving us any credit. They weren't talking about us at all."

Tampa Bay's pitching has stifled Houston's powerful lineup in this series, with the Astros averaging just 3.25 runs a game and batting a combined .241 after leading the majors with a .274 average in the regular season. George Springer, Michael Brantley and Carlos Correa have all struggled at the plate this post-season and are a combined 7 for 48 in the series.

"We've got really good pitching. That's the biggest key," Cash said. "I like the fact that for the most part we have attacked them in the strike zone. They're an offence that if you ... mess around and don't establish strikes, they're going to get you, and they're going to find their way on base, and that's when they really get the big hit."

Despite the trouble at the plate, Hinch doesn't plan to make any changes to the lineup in Game 5, aside from starting Martín Maldonado at catcher as he always does when Cole pitches.

"I don't think now is the time to really turn your back on one of the best offences in the big leagues just because the pitching staff has had a run of success for a couple of games," Hinch said.