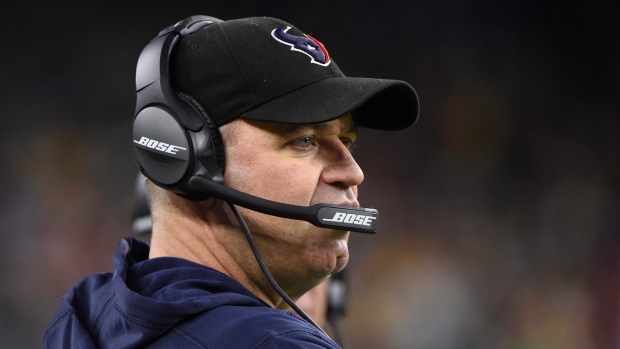 Bill O'Brien's role with the Houston Texans just got a lot bigger.

Along with his duties of being the head coach, the 50-year-old has been named general manager, the team announced Tuesday.

In a statement, Houston Texans chairman and chief executive officer Cal McNair said, "Preparations are underway for the 2020 season and I thought it was important to update titles, roles and responsibilities for Bill O'Brien and Jack Easterby so they more accurately reflect the way we have been operating for the past eight months."

Easterby has been promoted to executive vice-president of football operations.

McNair added, "I was encouraged by the progress that our team made on the field this year which was due in part to our new structure, operating approach and the leaders within our football operations group. I am proud that we provided our fans with many thrilling victories at home, including a playoff win, and we delivered another double-digit win season. Our fans deserve that, but now it is time for the organization to get back to work toward our pursuit of a world championship for the city of Houston."

In their first season together, O'Brien and Easterby led the Texans to a 10-win season and the team's second-consecutive AFC South title. The Texans beat the Buffalo Bills on Wildcard Weekend before blowing a 24-0 lead against the Kansas City Chiefs in the Divisional Round.

O'Brien has been the head coach in Houston since 2014, and has won the AFC South four out of the last five seasons - tying him for the most division titles by an active head coach in their first six years -

His first order of business as the GM will be free agency, as he looks to re-sign a Texans free agent class highlighted by cornerbacks Bradley Roby and Johnathan Joeseph, and running back Lamar Miller.