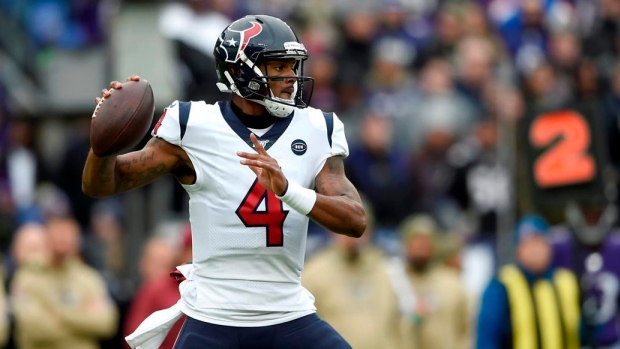 Houston Texans quarterback Deshaun Watson learned from a high school coach that no matter how good or bad a game was, he had to move on to the next one quickly, or "snap and clear," as his old coach used to say.

That mantra will be perhaps more important than usual this week as Watson and the Texans look to bounce back from an embarrassing loss to Baltimore when they host Indianapolis on Thursday night with the AFC South lead on the line.

Watch the game LIVE across the TSN Network and TSN Direct at 7:30pm et/4:30pm pt.

"That was our theme all through my high school career where good or bad, you're always going on to the next play," Watson said. "And OB (coach Bill O'Brien) always says you're only as good as your next game, you're only as good as your next play. So you've got to continue to have that mindset because you can never get too comfortable in this league."

The Texans and Watson were anything but comfortable on Sunday when he was sacked six times and had two turnovers in a 41-7 dismantling by the Ravens.

The Colts are on the opposite end of the spectrum, entering this matchup of 6-4 teams after beating the Jaguars 33-13 last week. Like Watson, Colts quarterback Jacoby Brissett is looking forward instead of dwelling on the last game — especially with the short week.

"Everybody on the team understands the quick turnaround we have," he said. "Everybody understands that they're going through the same thing we're going through. I think as one of the leaders you don't have to make a huge production about it. You just go out there ... and understand the focus we need because we're not going to get the same practice reps we would during a regular week."

Houston receiver DeAndre Hopkins said he started looking ahead to Indianapolis in the fourth quarter against the Ravens when it was clear the game was out of reach. The Texans don't want to build up this game too much but know that losing to the Colts twice in one season would make it difficult to reach their goal of winning the division.

"It's a big game," Hopkins said. "Some of the young guys have never been in this situation, but with me being here and being on this team for a while, I understand everything we want is still in front of us. So every game is big and important, but to me this is the biggest game of the year so far."

Hilton anticipates his availability for Thursday will be a game-time decision but remains hopeful of being cleared to return to action. His return would give Indy a potentially gigantic boost. In 15 games against the Texans, he has 82 receptions, 1,519 yards and 10 TD catches.

"It's just if I can get back out there and help my team," he said. "It has just been tough for me watching these last three games and I'm not accustomed to missing games."

Houston defensive co-ordinator Romeo Crennel is convinced that Hilton won't miss this one.

"He's going to play," Crennel said. "He's probably counting on it, and I'm — well not necessarily counting on it or looking forward to it, but you've got to prepare for him to play because he'll show up."

"That's such a valuable part of what he does is that he can, whether it's a third-down catch or a second-down catch that goes for a first down where you don't have to deal with third down, he does a great job of that," O'Brien said.

Hopkins takes great pride in his ability to move the chains, and Watson appreciates that quality in his star receiver.

"It makes my job a lot easier for sure," he said. "A guy that can go out there and catch every ball, knows what we need, especially on third down, and a guy that finds ways to get open even if he's doubled ... put the ball in his area he's going to make sure he catches it."

The league's 2014 sack champion leads the Colts with eight sacks and has recorded sacks in six consecutive games for the third time in his career. His current streak is the longest in the NFL, and as the Colts’ defence continues to improve, teammates and coaches believe Houston has made a huge impact beyond his pass-rushing presence.