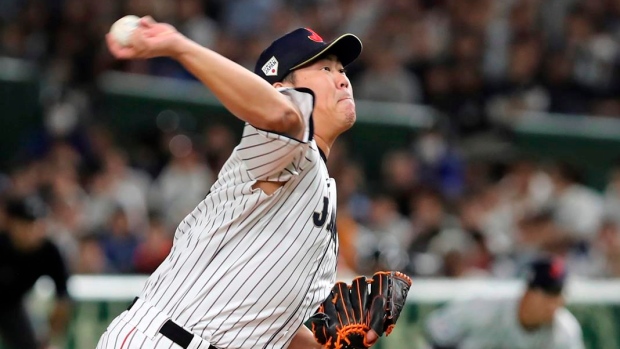 TORONTO — No matter the ultimate role, the Toronto Blue Jays are convinced of one thing when it comes to Shun Yamaguchi: His split-finger fastball will allow him to get outs in the major leagues.

Dipping their toes into the Japanese market for pitching depth Tuesday, the Jays agreed to terms with Yamaguchi, a 32-year-old right-hander, on a two-year deal worth a little more than $6 million total, according to sources.

While there’s always a perceived upside that comes with the unknown, the veteran of 14 Nippon Professional Baseball seasons has logged 1,080.1 innings and registered a 3.35 career ERA in a variety of roles, including leading Japan’s Central League in strikeouts with 188 this year for the Yomiuri Giants.

Subject to the posting system, the Blue Jays will also have to pay the Giants 20 per cent of total guaranteed value of the contract as a release fee, which adds up to about $1.2 million.

Right now, the Blue Jays envision Yamaguchi attempting to earn a spot in the rotation next spring, but if he isn’t one of the best five or struggles, the 6-foot-2, 198-pounder could be used in any number of bullpen roles.

It’s notable that, in addition to being used as a starter since 2015, Yamaguchi also has 112 saves on his resume, and the splitter that’s viewed as a plus pitch might be the swing-and-miss offering needed to become a go-to option for manager Charlie Montoyo in high-leverage spots.

Yamaguchi earned his first Best Nine Award — essentially best player at every position — in his final season in Japan this year, and he’s the first Giants player to ever be posted.

“I will take a shot at my dream of playing in the majors,” Yamaguchi told the Japan Times at a press conference in November. “I’d like to express my appreciation to Yomiuri Giants officials, manager Mr. (Tatsunori) Hara, my coaches, teammates and fans for the past three years.

“I will work even harder as I pursue a new challenge.”

Yamaguchi’s ability to pitch in multiple roles will assure him one of the 13 spots on Montoyo’s pitching staff, but his name will be among a growing glut of rotation candidates when pitchers and catchers report to Dunedin on Feb. 13.

Other than Tanner Roark and the $24-million deal handed to him by Blue Jays GM Ross Atkins at last week’s winter meetings in San Diego, there’s really no clear picture past that.

Past that group of seven, there’s T.J. Zeuch and Anthony Kay, with Nate Pearson’s arrival looming, potentially in June or July.

Whether or not the Jays can add to the top of the rotation with one of few impact names left on the market remains to be seen.

Atkins is still chasing southpaw Hyun-Jin Ryu, but the asking price may be too much for the Blue Jays in the end, especially with both Los Angeles teams desperately seeking rotation help, while Dallas Keuchel could be in a similar spot when all is said and done.

Even if the Yamaguchi deal is more of a depth move than anything, the biggest impact could come from planting a Blue Jays flag in Japan, thus opening doors for future free agents to at least take a closer look at Toronto as a potential landing spot.

Led by Andrew Tinnish and Ryan Mittleman, the Jays scouted Asia aggressively this year and had shown limited interest in outfielder/first baseman Yoshitomo Tsutsugo, who inked a deal with the Tampa Bay Rays, as well as outfielder Shogo Akiyama, 31, who remains unsigned and presents an intriguing solution to their hole in centre field.

The Jays had also done background work on Korean-born left-hander Kwang-Hyun Kim, who agreed to a contract similar to Yamaguchi earlier this week, a two-year, $8-million deal with the St. Louis Cardinals.

It has been almost seven years since the Jays signed a Japanese player, inking colourful infielder Munenori Kawasaki (2013-15) to a minor-league deal in March of 2013.