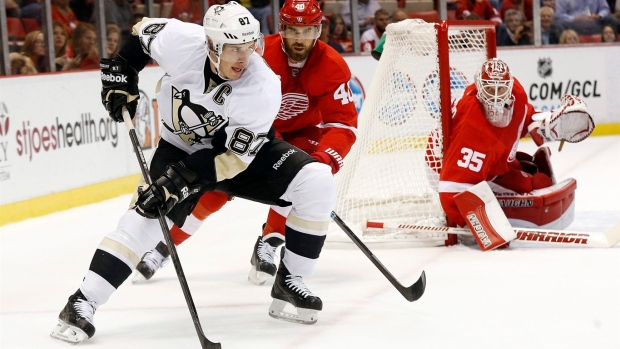 A challenge to Sidney Crosby's supremacy seemed within the realm of possibility when ballots went out for voting on TSN Hockey's Top 50 this year.

Sure, Crosby was the big individual regular season winner in 2013-14 but it was conceivable that consecutive (and disappointing) playoff exits could diminish the Pittsburgh centre's greatness, however slightly - and leave an opening in voters' minds for a rival to wedge in and earn serious consideration.

Eighty-five per cent of voters on a panel of NHL coaches, general managers and TSN experts named the 2013-14 Art Ross Trophy, Hart Trophy and Ted Lindsay Award winner No. 1 on their ballots. It was a rout again – he earned 88 per cent of No. 1 votes in 2013 - making it five straight years Crosby has been voted the world's best player in the TSN poll.

Only Chicago Blackhawks centre Jonathan Toews kept it from being unanimous.

There is but one conclusion. Crosby remains unparalleled, if not unstoppable – witness five pointless games in a seven-game second round playoff loss to the New York Rangers – with the latter saying less about No. 87 and more about the lack of Pittsburgh's depth and extraordinary depth of competition in today's game.

If the measure of a hockey player is the company he keeps, then Crosby belongs among the pantheon of all-time greats.

Toews was the only other player to receive No. 1 votes and he placed second in balloting, improving upon his No. 3 ranking in 2013. The Chicago superstar – who was actually used more than Crosby during Canada's gold medal run in Sochi - is the consummate captain and champion, winning two World Junior Championships, two Stanley Cups and of course, two Olympic gold medals.

Completing the exclusive group are centre Evgeni Malkin (No. 6), who trails only Crosby in regular season and playoff points per game since 2005-06; defenceman Drew Doughty (No. 7), who based on Stanley Cup and Olympic performances, is the game's best big game blueliner; rearguard Shea Weber (No. 9), the NHL's leading goal-scorer from the blue line since entering the league in 2005; and right winger Patrick Kane (No. 10), who earns as many style points as actual points for the works of art he creates on ice.

1. NHL goal leader Alexander Ovechkin, who ranked No. 2 the first two years of the poll, is at No. 12 this season.

3. Henrik Lundqvist is the top-ranked goalie at No. 16 and only netminder to make the list all five seasons.

7. Only six of 30 teams are not represented: Calgary, Vancouver and Winnipeg, along with Buffalo, Florida and New Jersey.

8. Chicago and Boston have the highest representation with five players each. Colorado boasts a league-high three players on the list who are 23 or younger - Matt Duchene (23), Nate MacKinnon (19) and Gabe Landeskog (21) – plus goalie Semyon Varlamov (26).

9. Eight players earned Top 50 status for the first times in their careers – including 30th-ranked Tuukka Rask and Kyle Okposo at No. 50.

10. Missing the cut by one at No. 51 is St. Louis Blues captain David Backes.