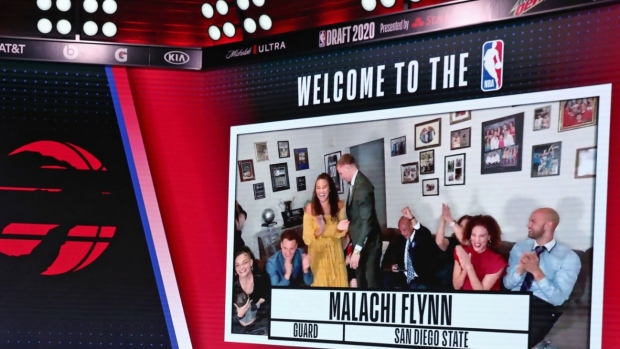 TORONTO – One way to understand the DNA of an athlete is to know where they came from.

For the two newest members of the Toronto Raptors – tough-minded point guard Malachi Flynn and athletic combo guard Jalen Harris – family life has had a lot to do with the basketball players that they’ve become and hope to continue growing into.

Flynn, selected 29th-overall out of San Diego State in Wednesday’s NBA draft, grew up as the youngest of seven kids. There was a big age gap between him and some of his brothers and sisters.

Raised in Tacoma, Wash. – where his mother would drive him and his siblings to school and their various sporting activities in an eight-passenger van – Flynn didn’t hit his growth spurt until his sophomore year in high school. He was a 5-foot-2 freshman.

Now, at age 22 and standing 6-foot-1, it’s not hard to see where his lauded competitive fire – or the chip on his shoulder – comes from.

“I think it's played a huge role in being where I am today,” Flynn said via videoconference from his home in Tacoma on Thursday afternoon – roughly 17 hours after hearing his name called and realizing a lifelong dream of being drafted by an NBA team.

“Just in being the youngest and always being around them growing up. There was always something going on in the house – going to a brother's track meet, going to a sister's basketball game. Just seeing that, and definitely just being competitive, all the kids, you've gotta fight for whatever you want. So it was fun growing up in the house. It definitely [played] a huge role in who I am today.”

Meanwhile, Harris was born into a basketball family. His parents both played at Southern Methodist University. In fact, his mother, Karlin Kennedy, is in SMU’s hall of fame and finished her career as the Mustangs’ all-time leader in scoring, rebounding and blocks. Harris concedes that, until his jersey is hanging in the rafters somewhere, his mom remains the best basketball player in the family.

Harris grew up in southern Dallas, Texas, and played multiple sports, including football and baseball. However, basketball was his first love and by the time he started high school he had made the decision to stick with and pursue hoops.

“Growing up, I was born with a basketball in my hand,” said Harris, the 22-year-old out of Nevada, who the Raptors selected with the penultimate pick in Wednesday’s draft, 59th-overall. “It was never forced on me though. It was always an option. I played the other sports, so I had the chance to do other things. My mom has the reputation for being a good basketball player, which she was, and my dad does all my on-court work, my training, my workouts and stuff. They have literally done everything they can to get me here.”

By all accounts, the Raptors found a couple of talented young players in Flynn and Harris, who faced each other a couple times in the Mountain West Conference last season, with Flynn’s Aztecs winning both meetings (he scored a career-high 36 points in one of them).

Flynn is a well-rounded, two-way lead guard that should be able to step right in and fill a role early in his rookie season. At 6-foot-5, Harris is an elite athlete with a knack for scoring the ball.

However, in addition to their skill set and the physical tools that will determine whether they’re successful on the court, there are certain traits they both possess, qualities that the organization values highly and tends to look for in the prospects they bring in.

At 22, they both have a maturity and professionalism to them, which stood out to Toronto during the pre-draft interview process. They’re both confident in their ability and fiercely competitive.

These are the types of guys that fit their culture. You can see the similarities between them and some of the players that have already been successful in their program.

For Flynn, a tough undersized guard that plays bigger than his height, the comparisons to Kyle Lowry and Fred VanVleet are natural.

At his size and with his ability to get to the rim and score, Harris reminds you of a young Norman Powell. But it’s not just the talent that links them to these established Raptors stars. It’s also their mentality.

They’ve both been overlooked and underestimated, and they both play like they have something to prove – another quality that Toronto’s front office is fond of.

Questions about Harris’ NBA fit – in between two or three positions – were among the reasons he fell to the second round, like Powell five years earlier. The concerns that caused VanVleet to fall out of the draft altogether in 2016 – his size and theoretical lack of upside – also sound familiar to Flynn. However, also in the mould of VanVleet, he has a strong opinion of himself.

“I mean, it's some of the same things that I've kind of heard my whole life, to be honest – that I'm smaller, that I'm not the most athletic,” he said, with some Bet on Yourself energy that would make VanVleet proud. “Those things are true. It's not like I can really control those things. I can't go and grow taller. I wish I was 6-5, or 6-6, or whatever. But for me, it's just going out there and proving myself right in my ability, just working hard and not really trying to worry about what they say. I mean, somebody is always going to have an opinion. So, as long as I'm just focused on what I gotta do and what the Raptors organization wants me to do, I think I'll be fine.”

That’s the kind of attitude you would imagine one might need to hold their own in a van packed with six older siblings. It should also prove useful as a first-year player in a league – and a business – that can humble even the toughest competitors. Life in the NBA isn’t easy, especially for young players, but the two newest Raptors come in well prepared by the paths they’ve taken to get this far.​