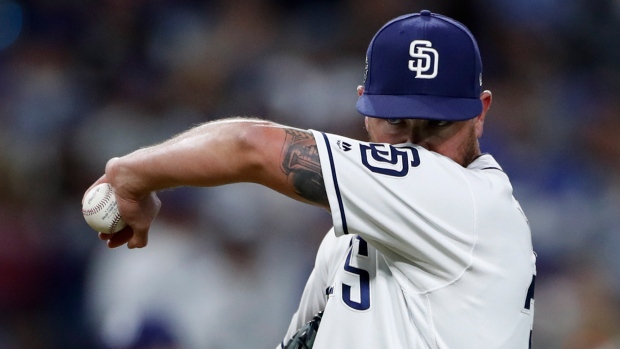 TORONTO — For the first time in six years, the Toronto Blue Jays will head into spring training without a set-in-stone closer.

Back in 2015, it was a 20-year-old Roberto Osuna emerging out of the low minors to claim the role, before he was rightly jettisoned the heck out of Toronto in July of 2018 in exchange for Ken Giles, who held the role to start each of that last two seasons.

This spring, with Giles out for the year and still sitting on the free-agent market, there’s going to be a lot of talk surrounding the ninth-inning role and a lot of eyes watching for a potential bounceback for Kirby Yates and a potential full-season breakout for Jordan Romano.

As of today, it’s Yates, Romano and Rafael Dolis as the clear high-leverage choices for manager Charlie Montoyo, with the front office also on the hunt for another arm to add to that mix, potentially left-hander Brad Hand.

If this were 10 years ago, Yates would have already been named the closer.

But bullpens don’t work the same way anymore and the Jays are one of the teams interested in — but not married to — keeping their roles fluid, a la the creative Tampa Bay Rays.

That doesn’t mean one pitcher won’t end up with the majority of the saves, it just means matchups, rest and a host of other factors will dictate the usage on most nights.

It’s the way things should be done, too.

The ninth inning isn’t always the turning point and doesn’t always have the most important outs, but relievers are also historically creatures of habit and some prefer set roles and knowing exactly how they’re going to be used.

Even though a wonky right elbow and subsequent surgery to remove bone chips in August resulted in a lost season for the soon-to-be 34-year-old Yates, his 2019 season was the reason he was such a coveted reclamation project on the free-agent market.

It only took a $5.5 million base salary to land him, but he could earn up to $4.5 million in additional incentives.

If he looks anything like two years ago when he closed out 41 games for the San Diego Padres with a dominant splitter leading to a 1.19 ERA across 60 appearances, he’ll be worth every penny and will likely end up with the majority of the saves.

“I think I need to first prove I’m healthy, and then I need to prove I’m still myself and capable of doing it,” Yates said. “I think if I can go out there and do those two things, I think I have a good opportunity of being able to get that ninth inning. But it is what it is. I’ll take any role I can get, as long as I can go out there and pitch and do my job and help us win. If I’m pitching in the eighth inning and there’s somebody better for the ninth inning, that’s totally fine. If I’m locked in and doing my stuff, that means the guy that’s getting that ball in the ninth inning is going to be pretty good and that’s all you want in the ninth inning.”

It’s impossible to know if Yates can get back to that level until he’s on a mound facing hitters in camp, but the fact he never relied on huge velocity is encouraging if he can simply find the feel for his splitter again.

Calling it one of the best pitches in baseball when it’s working is not a stretch.

The problem with relievers is they come and go and you just never really know.

Yates went from being claimed off waivers twice in seven months in 2016/17 to being the best closer in baseball two years later.

“I think it was about halfway through 2017,” Yates said of when he found the feel for the splitter, a pitch that was still fairly new at the time. “I had thrown it enough in a big-league game and faced enough good big-league hitters to where I felt every time I threw a good one, it worked. It was just about being able to throw those good ones more consistently. The more I threw it, the better it got.”

Health and finding that pitch again are the two obvious keys for Yates in 2021.

A season like 2019 would have him primed to re-enter the free-agent market next winter as one of the top options.

“I think when I’m healthy I can go out there and attack hitters and kind of dictate at-bats,” Yates said. “I think that’s one of those things that I’ve gotten pretty good at the last few years. I think I’m getting smarter as a pitcher as I get older and needing that opportunity to apply that on an every night basis is very important to me and especially being able to re-establish myself and prove myself.

“I’ll find out everything once I get to spring training and face hitters and I get to really judge where I’m at. As far as right now, I feel really good.”

For Montoyo, the perfect bullpen scenario likely involves some combination of Dolis and Yates residing in the eighth and ninth innings, with Romano being used as the fire extinguisher — the arm called upon to put out hot-spots in key situations — if he looks anything like he did before last year’s freak finger injury.

But it’s worth repeating: You really just never know with relievers from year to year.

Like Dolis’ emergence last year on an under-the-radar free-agent deal, Tyler Chatwood, who signed a one-year contract for $3 million this week, could also play a role if he takes to the shift to the bullpen after being a starter for the majority of his career.

Then there’s lefty Ryan Borucki and potentially Julian Merryweather, who looks like a future closer type if the Jays can’t successfully turn him into a starter.

Add in another free-agent arm like Hand, Jake McGee or Trevor Rosenthal and it’s suddenly a formidable group of high-leverage options on paper.

In the end, performance usually sorts out the pecking order.

“It’s just about communication and understanding what your job is that night,” Yates said about today’s role-less bullpen usage. “Whether it’s going to be the seventh, eighth or ninth, I think I’ve done it all where I know how to prepare for it.

“The more guys you can rely on, the better because that takes the load off everybody else and it kind of makes it easier for everybody to settle down into roles and kind of understand what situation they’re going to pitch in. I think when you can do that, it’s easier for guys to prepare and kind of understand what their role is and how to go out there and get their job done.”

As for what led Yates to pick the Blue Jays over a number of other suitors, it was the young core and the front office’s pitch.

A few hours later after Yates agreed to terms, they made the big splash late Tuesday night.

“When you sign a guy like George Springer, it’s like, boom, OK perfect, this is awesome,” Yates smiled. “It’s just exciting to be a part of that, a team that’s trying to push really hard to go to the next level.”​