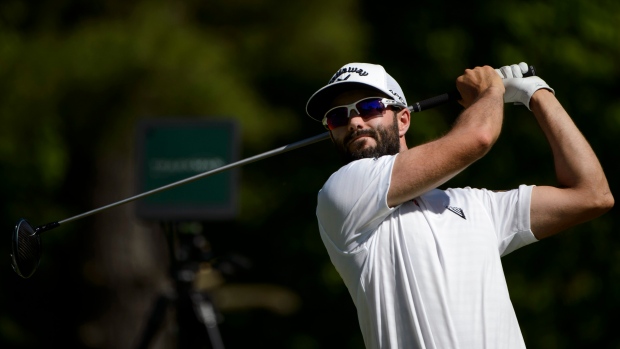 Adam Hadwin tees off on the 15th hole on Friday. , The Canadian Press

The second round of the RBC Canadian Open featured course- and tournament-scoring records, as well as a plethora of low rounds that had the leaderboard bleeding red. One of the reasons for the low scores was the slow pace on the greens that allowed players to get a bit more aggressive with their putting.

“I was hitting the ball so well off the tee and making so many putts,” said Snedeker, who is a shot back of co-leaders Matt Kuchar and Scott Brown. “Just trying to put the ball on the green. I knew if I did that I had a good chance. One of those rounds where everything comes together.”

Snedeker’s round tied the tournament record of 60 set by Carl Pettersson at St. George’s back in 2010 and also lowered the lowest score fired at Hamilton Golf and Country Club by two shots.

Firing low scores is nothing new for Snedeker. Last year at the Wyndham Championship, he went one better with a 59.

Coupled with Friday’s round, that put him in select company with Phil Mickelson, Zack Johnson and Jim Furyk as the only players in PGA Tour history to have posted multiple rounds of 60 or better.

As for course records? Snedeker couldn’t remember how many he owns.

“I have no idea. Maybe five or six?” he guessed.

The slow greens at Hamilton seemed to confuse many of the players in the opening round but that certainly wasn’t the case for Snedeker, who is regarded as one of the game’s best putters. After admittedly leaving the ball short too many times on Thursday, he rolled in 136 feet of putts on Friday, including eight one-putt greens.

“You don’t get these days very often on Tour,” he said. “More often than not you’re getting beat up. You have to take advantage of it.”

Snedeker wasn’t the only player to take it deep.

Brown and Kuchar both posted rounds of 63 to set the tournament’s 36-hole scoring mark of 128.

The Canadian contingent was also among those going low. Ben Silverman led the way with a 61 to shoot up the leaderboard into a tie for seventh.

“We could just ignore Sned’s and say it was the greatest Canadian Open round ever,” joke Silverman, whose round included eagles on both par fives.

The key to the Thornill, Ont., native’s round was off the tee, where he hit all 14 greens. A day earlier, he struggled, putting the ball in the short grass just five times. But in a Thursday post-round range session, he discovered a small alignment fault and the correction showed through on Friday. That allowed him to take advantage of the greens where he putted just 25 times.

The round was important for Silverman for both short- and long-term necessities.

In the short-term, it vaulted him into contention for his national championship. In the longer term, it means job security with the possibility of collecting vital FedEx points. He currently sits in 184th place with 95 points in the FedEx standings.

“I know where I stand and I know how many points I need to make and that’s my focus right now,” he said.

Silverman is one of four Canadians inside the top seven, a remarkable achievement considering there have been years when only two or three Canadians made the cut.

Nick Taylor is at 11-under, just a shot off the lead, while Adam Hadwin sits at 9-under. Mackenzie Hughes, who grew up 10 minutes from the Hamilton G&CC, is tied with Silverman in seventh place.

“This is my 10th one,” said Hadwin, “and I can’t remember having this many guys up there. Usually it’s one, maybe two of us. . . we have a really good shot at it this weekend, for one of us to challenge for a title.”