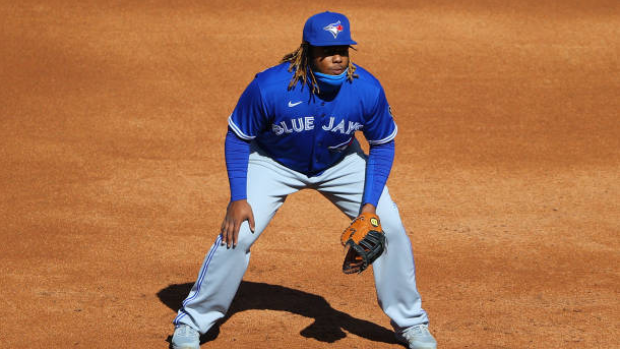 Envisioning the infield Charlie Montoyo will send out on opening day — whenever that may be — is just about impossible at this point.

There are moving parts everywhere for the Toronto Blue Jays, in addition to off-season moves yet to come.

A central figure of it all is Vladimir Guerrero Jr., a 21-year-old kid without a position and a bat that has yet to meet the enormous expectations that come along with being the former No. 1 overall prospect in the game.

Last July, after showing up to summer camp out of shape, the Jays made the on-the-spot decision to shift Guerrero across the diamond to first base, a move the majority of baseball observers had seen as a long-term fit anyway.

There’s no doubt that sent a message – an embarrassing one.

From there, Guerrero started to shed weight, and those around him saw his routines improve.

It’s arguable how much weight Guerrero lost and when, but the story is he showed up in Toronto after the first lockdown around the 280-pound mark and eventually was able to trim down to around 250 by October.

There’s an end goal to all of this and it revolves around a playing weight in the 235-pound range.

The belief – and everyone is on the same page about this in both camps – is that’s the optimal size for Guerrero to perform, whether it involves balance and power at the plate or moving laterally in the field.

It’s become clear Guerrero wants to prove he can play third base, and the Jays will allow him to play the position in the Dominican Winter League for the Escogido Baseball Club. But with the club clearly shifting into contention mode – and the stated goal is to improve defensively – the best way to describe the situation at this point would be to call him a third base option, rather than a third baseman.

“It’s such an interesting situation because, as you know, we are not in a position to deny permission and early on his motivation was to play third base, to get in a physical state where he could be more than just effective there, and we’ve been supportive,” Blue Jays GM Ross Atkins said this week. “We’ve been supportive of the progress he’s made and obviously excited about each day that he’s improving and it’s something that we’re working through each day with him as we factor in all the risk.”

The reason to leave the third base door open a crack is simply because there’s no reason to close it, as the Jays believe the arm and agility will work at the position if he’s in the shape he needs to be in.

That crack is probably actually just a sliver in reality.

“It’s something we talk about every day and we’re going to use every day [this off-season] to factor in his progress as we make those decisions,” Atkins said. “Whether that ends up being a door left open or a door cracked open will be determined by each day of his off-season and what opportunities present themselves as they come.

“I would just like to have every single piece of information before we decide how open or shut that door is at third base.”

Let’s remember, this isn’t an unusual scenario for an uber-talented corner infielder arriving in the big leagues, either.

Albert Pujols split his time between first, third and left field over his first three seasons from 2001-03, before settling in at the cold corner for a Hall of Fame career in his fourth campaign.

Same with Miguel Cabrera, who followed the Pujols path, splitting his time as a mostly atrocious third baseman/left fielder early on, before shifting to first base in his sixth big-league season.

Both of those players turned out just fine despite the defensive uncertainty early in their careers.

With that being said, the Jays aren’t looking for first basemen in free agency or the trade market and it’s very likely Guerrero’s first base glove gets the most use next spring in Dunedin.

On the other hand, the Jays are extremely interested in a third base upgrade if they can make it happen, which would leave Guerrero, Rowdy Tellez, and Cavan Biggio in a pinch as the first base group.

Right now, each and every infielder with a famous last name is facing some positional uncertainty.

The Jays’ continued interest in top shortstops has Bo Bichette on notice, while Biggio’s versatility has him pencilled in at either second, third or super-utility.

But Guerrero’s glove and body composition have been under a microscope since he arrived in Double-A as a 19-year-old back in 2018, and nothing has changed.

“If he’s coming in at the stage he was and overall body comp and weight and agility that he had when he was in Double-A, it’s realistic to think about him being an impact player at third base,” Atkins said. “I don’t know how many games, I don’t know for how long, but limiting a 21-year-old doesn’t seem like the best thing to do.”

The one drawback to allowing Guerrero to continue to dabble at the hot corner is that time and those reps could be used to improve defensively at first base, the spot everyone believes is still his long-term home.

“That was a lot to ask of him last year and I think the experience he had [at first base] will be helpful if that’s where he ends up playing,” Atkins said. “So much of it is not just experience though. So much of it is athleticism and confidence to put your body in good positions to have the agility to be prepared to move in different directions. It’s a combination of those two things at first.”

With overall defensive improvement an organizational priority and Guerrero facing an uphill battle to even get to slightly below average with the glove, the third base experiment could be in the final stages. But it’s the lessons learned to get through the first adversity he’s encountered in his career that may end up being beneficial in the end.​