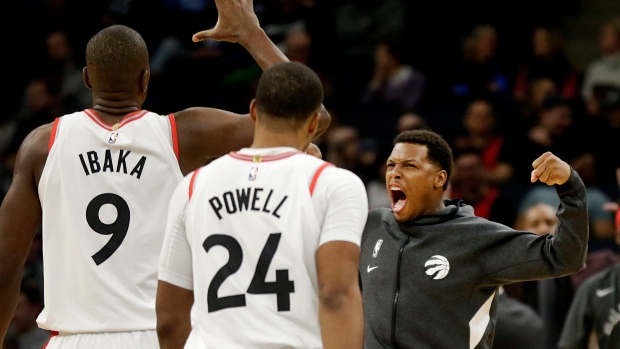 TORONTO – By Thursday afternoon, the NBA should have the framework in place to restart the 2019-20 season at Walt Disney World Resort in Orlando, Florida later this summer.

With a conference call scheduled for 12:30 p.m. ET, the board of governors is expected to vote on and approve the league’s proposed plan, according to multiple reports.

The details, as per ESPN and The Athletic, are as follows:

- 22 teams would be included: the 16 teams that occupied a playoff spot when the COVID-19 pandemic forced the season to be put on hold on March 11, as well as the six teams that were within six games of the eighth seed in their respective conferences – Portland, New Orleans, Sacramento, San Antonio and Phoenix in the West and Washington in the East.

- Each team would play eight regular-season games, with games targeted to begin on July 31.

- If the ninth-place team finishes the regular season within four games of the eighth seed in their conference, they will compete in a play-in tournament to decide which club qualifies for the playoffs. The team in ninth would have to eliminate the eighth seed twice in order to advance.

- Outside of a potential play-in tournament to decide eighth place, the playoff seeding and competition structure is expected to remain status quo: separate East and West brackets, seven-games series’ and no reseeding.

Of course, the health and safety protocols that will need to be implemented to mitigate risk and protect players, coaches and team personnel on site are far more important than these logistical or formatting particulars. While some of those details have already been reported – daily testing, social distancing guidelines off the court, no guests permitted on the Disney campus until the playoffs, etc. – many are still being negotiated between the league and the players association.

The virus is in charge, roadblocks remain and plans could still change. On a conference call with the NBA’s head coaches a few weeks ago, commissioner Adam Silver insisted that he’s not afraid to move the timeline of a return or even pull the plug on it altogether in a scenario where it’s deemed unsafe to move forward.

However, for the first time since the league closed its doors nearly three months ago, there’s light at the end of the tunnel. Barring an unforeseen development, basketball is coming back.

What does that mean for the reigning champion Toronto Raptors? First and foremost, they’ll get a chance to defend their title. They’ll also have an opportunity to finish what they started back in October.

“It's going to mean a lot,” said Raptors all-star Pascal Siakam, who spoke to the Toronto media via conference call on Wednesday afternoon. “Obviously, you don't want your season to just go to waste. There's been a lot of blood, sweat and tears go into the whole season, working hard. I think particularly for us with injuries and everything that we've been through, trying to get healthy all season, working really hard as a team, and beating the odds each and every game, obviously we don't want to see it end like that. So, we want to be able to play and continue to move forward and hopefully that can happen. We're excited about attacking another title.”

When play resumes, Toronto will reclaim its record of 46-18 – which, as a refresher, ranks second in the Eastern Conference, 6.5 games behind first-place Milwaukee and 3.0 games ahead of third-place Boston. The Raptors are one of four teams to have already clinched a playoff spot, joining the aforementioned Bucks and Celtics, as well as the Lakers.

It’s expected that teams will reconvene in their home cities in early July before beginning training camp at Disney later in the month. The Raptors will almost certainly go straight to Orlando to simplify the process and maximize training time.

Roughly half the team is currently in Toronto, with the other half scattered throughout the United States. The NBA believes it has government support from both the U.S. and Canada and league officials have assured players they will be permitted to travel between countries when they need to, sources confirm.

They will need to follow quarantine protocol each time they cross the border, though. With that in mind, it makes more sense for the players and personnel that are in Toronto to meet the others in the U.S. and quarantine there for 14 days before camp than it would for those in the U.S. to come back to Canada and have to quarantine twice.

Teams are hoping to get at least two-to-three weeks of training camp in before playing meaningful games, knowing it’s going to take time for everybody to get back in shape.

It’s been more than 12 weeks since the Raptors last played a game. Until recently, many players hadn’t stepped foot in a gym. For most of that time they were limited to riding stationary bikes and lifting weights at home, going for runs outside or, in some cases, taking shots by themselves on a portable hoop. These are things that every team has had to deal with during the layoff.

Unlike some of the lower-seeded clubs, who will be jockeying for position in the standings once the regular season resumes, the Raptors have the luxury of easing their way back in. That could be critical, especially for a veteran group.

Making up a 6.5 game difference in eight contests to catch Milwaukee for first place is almost impossible, but holding off Boston and locking up second remains important. It’s still advantageous to face Brooklyn (currently a half game up on the Magic for seventh place) or Orlando in Round 1, as opposed to Indiana or Philadelphia (note: the Nets haven’t officially ruled their injured stars – Kyrie Irving or Kevin Durant – out but their returns sound unlikely).

Still, as the ninth-oldest team in the NBA and one with aspirations of returning to The Finals, you have to imagine that the Raptors’ top priority will be getting everybody back up to speed, keeping their prominent players healthy and preparing for the playoffs. That was their approach well before a global pandemic forced them into a long layoff.

What could work in the team’s favour, even if it takes them some extra time to get those older bodies revved up again, are their chemistry, style of play and basketball IQ.

Their core has been together for years – they won a championship together – and they didn’t make any major changes at the trade deadline, so there’s a familiarity there that other teams might not have. As teams shake off rust, conventional wisdom suggests that offences could suffer, at least initially. Toronto’s strength is on the defensive end and it’s predicated on the vision and overall intellect of older players like Kyle Lowry or Marc Gasol.

It may take time to get your shot or your legs back, but your mind will still be ticking. As one of the smartest teams in the association, the Raptors should have that advantage.

“I think we have a great group of guys, people that actually genuinely care about each other,” Siakam said. “Most of the group, we [workout in] L.A. [during the off-season], we do different things. I feel like there's chemistry there. We've been playing [together] for a while, we [won a] championship together, things you don't really forget. And if anything was lost we'll find it back.”

Another silver lining for the Raptors – one of the NBA’s most banged-up teams over the first 64 games of the regular season – is that they should be well rested. Gasol, who may have been overworked coming off a full year of basketball and was battling a lingering hamstring issue, has had several months to heal. Guys like Lowry, Fred VanVleet and Norman Powell, who had accumulated a myriad of bumps and bruises over the course of a long regular season, will come in fresh.

That applies to every team, of course, but few dealt with the volume of injuries Toronto did. The Raptors only had their full roster available twice and not since their fifth game of the campaign, which was more than eight months ago. Theoretically, no team should benefit more from the hiatus, unless Irving and Durant are able to return for Brooklyn.

If the Raptors can go all the way again they’ll have to play until October. That would mean spending more than three months in the NBA’s bubble, or “campus-like” environment.

“It’s going to be tough. I’ve been [in one place] for so long, l lose track of time, I don’t even know what year it is,” Siakam said, speaking for most people these days. “I don’t know what’s going on, to be honest.”

For guys that are used to the travel of a busy NBA schedule, it’s going to be strange to be in one spot. If you’re lucky enough to be one of the teams that go deep into the playoffs, it will be weird to live in a singular hotel room for so long. It’s going to be hard to be away from home, to play in an arena without fans or to avoid giving your teammates high fives.

Whatever comes next will be bizarre, but assuming it can be done safely, the return of basketball is something to look forward to.​